A quick phone call as I was walking out the door started about an hour of frenzied investigation, clothes changes and u-turns. All for a car accident, all for a guy who hits a golf ball for a living.

All for Tiger Woods.

When I first heard that Tiger had been in a car accident the normal “reporter” questions flashed through my head. Where? When? Why? Which lead to other questions like: What was he doing driving out of his house at 2:25 am? He hit a what? A fire hydrant? And a tree? None of it made sense of course, and the idea that Tiger was in “serious” condition in a local hospital had me driving straight to work to do more investigating and get the story on the early news and keep it simple.

Of course the story changed about five times in the next 20 minutes. Tiger’s bleeding, Tiger’s in serious condition. Tiger’s still in the hospital. Tiger’s disfigured, blah, blah, blah. But sifting through that kind of information is what I’m supposed to do, and I was making phone calls, confirming some stuff and getting a laugh out of some others.

That Tiger was in a car accident is definitely news. That he was hurt is bigger news, and his condition is what everybody would want to know. The rest isn’t important. No alcohol, no drugs, no speeding and his wife had to use a golf club to knock out the back window of his 2009 Escalade in order to help Tiger out of the car.

The rest is speculation and none of our business.

There’s a report in one of the well-known tabloid magazines that Tiger has been carrying on with a woman, not his wife, at various stops around the world. So was Tiger in a fight with his wife about this report and stormed out of the house? It’s none of our business. What ever it is, there’s nothing in Tiger’s private life that shouldn’t stay private. We’re not entitled to any more information than what’s contained in the police report. Despite the insatiable desire to get any sort of salacious information, it’s none of our business.

None of our business.

It’s an orchestrated effort outside of the Gators’ practice field every night. Practice usually ends around six o’clock with the players filing out and walking from the field to the stadium, along side the O’Connell Center. Maybe about a quarter mile walk. Along the first half of that quarter mile, there are numerous autograph and picture seeking fans, all waiting to get a glimpse of the Gators and of Tim Tebow.

It’s a little bit confusing when you first walk up because there are all these people standing around, but they’re about 50 yards away from the gate of the practice field. I walked over there to find a female student athletic department assistant named Amy armed with a radio holding the fans at bay.

“You have to stay behind this pole,” she said as people were trying to surge forward.

Remember when the University issued a plea to students to stop asking Tim Tebow for his autograph on campus? Amy was there to keep these folks in line until practice got out. They were holding jerseys, footballs, sheets of paper, orange and blue posters, whatever, looking for an autograph. Matt Kingston, my photographer and I were given strict instructions to stay behind the pole. “You can take video,” she confirmed with somebody inside the practice field, “but you have to stay back here. And no interviews. That’s by Gate 1.”

“There are a lot of rules here,” I joked with Matt just as the players came pouring out of the gate.

Ryan Stamper and Brandon James both stopped to say hi, recognizing a familiar face from Jacksonville. Both have had big roles in the Gators success in the past two years. Tebow stayed on the practice field for at least an extra 20 minutes working on throws of different trajectory and velocity as well as distance.

Having covered an NFL team along with major college football concurrently for the last 15 years, the contrast in the media covering the two is dramatic. The NFL media is older, more cynical, wisecracking and judgmental. The college media is much younger, much more a bunch of fans and much much more deferential to the people they’re talking to.

The dozen or so media outlets covering Florida football during the week follow Urban Meyer around like lap dogs. The questions are all softballs, technical stuff that can’t go into a story but rather would qualify as “insider” info that they can use to impress their friends on campus. Half of them are asking questions trying to impress Meyer with their knowledge of his team. It’s a lay-up for Meyer every day. I guess that’s why when I asked him a question about motivating his team this week he was a bit startled.

First it was an unfamiliar voice and I’m pretty sure I asked him an actual question something like, “Is it a challenge to motivate this team in this stretch with them knowing they’re going to that game in December and who their opponent is going to be?” He literally did a double take and then very directly answered, “not this week. Not with who we’re playing.”

It was a mild reference to Steve Spurrier but without much emotion.

“Is it because of this particular team, the leadership this year, the guys on this team?” I followed up with. “We have good leadership on this team,” Meyer said without adding anything.

By the way, I’m sure Tim stopped to sign some autographs. In fact, my friends Joe and Liz were able to get Tim to stop for a photo for their Christmas card: 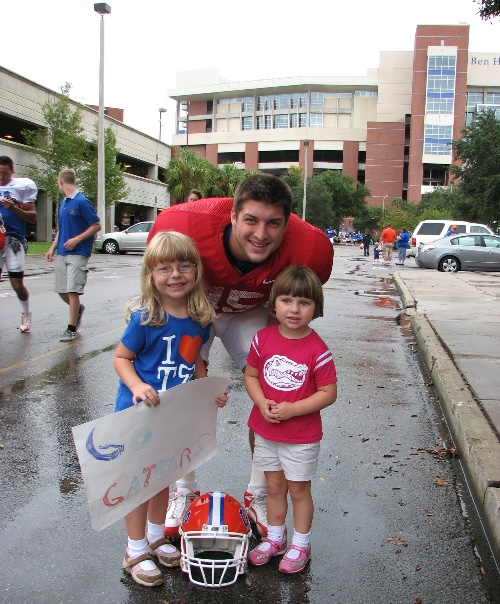 Georgia looked cool in the black pants and black helmets. “I saw that in warm-ups,” Tim Tebow said after the game, “and I said, ‘who cares.'” The Bulldogs have tried to change their luck in a variety of ways, but it looks like the only thing that will work is the eligibility of Tebow to run out.

Florida’s 41-17 win is their 17th in the last 20 years and completes a two-decade run of domination started when Steve Spurrier became the head coach of the Gators. Through three coaches at both schools, Ray Goff, Jim Donnan and Mark Richt at Georgia, Spurrier, Ron Zook and Urban Meyer at Florida, the outcome has been the same: Florida has been the favorite and it’s been an upset if Georgia wins.

While I believe that’s over, it does bear inspection.

Spurrier disliked Georgia from his days as a player and focused on that game more than any other. “It’s played in the Gator Bowl, it’s in Florida and we drive and they fly,” he said about the Florida/Georgia game at his introductory press conference in 1990. While he changed the way college football is played, he especially enjoyed running the score up on the Bulldogs. The time out/flea-flicker in Athens is one of the most despicable, un-sportsmanlike things I’ve ever seen.

“Aw Sammy, they’ll get over it,” Spurrier told me after that game.

Zook was given the boot, but beat Georgia when he wasn’t supposed to. Urban Meyer has taken this game seriously, and of course, he has Tim Tebow. Tebow is the perfect quarterback for Meyer’s spread offense, but more importantly, he puts so much pressure on the defense as a guy who can run that he opens things up for everybody else.

“I love winning this game,” Tim said afterwards. “It’s been a great experience to win on that field.”

With eighteen carries for 85 yards, Tebow kept an already reeling Georgia defense off balance. Combine that with his two early touchdown passes and he’s a one man wrecking crew.

Save for about 2 minutes after they scored a touchdown to make it 14-10, I never got the feeling that Georgia thought they could win the game. As long as 15 was in the game in Orange and Blue, the Bulldogs knew he’d do something to beat them. But that’s now over. Tim’s not coming back and defenses are starting to figure out the spread offense. Gator fans are going to need to get used to competitive games again against teams like Tennessee, LSU and yes, Georgia.

Georgia needs to get their act together and be competitive in this game again. And being competitive in this game also means contending for the SEC East title. They have a big time player in AJ Green but need a consistent quarterback and somebody to be a big play guy on defense. There’s a lot of rumbling in the ‘Dog Nation about Richt being loyal to a fault, so look for some staff changes in the off-season.

Florida’s win combined with South Carolina’s loss to Tennessee puts them in the SEC Title game in Atlanta. But they still have four games left in the regular season, all of which they’ll be a favorite in. Here’s where the challenge is: if the goal is always to “get to Atlanta” as Meyer says, once that’s accomplished can you shift focus to actually thinking about the National Championship?

It’ll be an interesting coaching challenge for all of those guys in Gainesville.