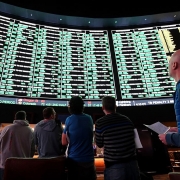 As a boss “Dirty Carl” was nearly the ideal kind of guy to run a bar in DC.  Well dressed, older than the staff, he commanded a level of respect because of his age and he knew the business.  He’d sit at the end of the bar, stay out of your way and hand out sage life advice to the bartenders and waitresses.  He’d disappear into his office for hours at a time, but it didn’t seem weird at all.

Because we all knew Carl ran the bar, but he made his money as a bookmaker.

“I’m worried that the FBI is tapping the phones and Carl is walking around here with the Racing Forum hanging out of his back pocket,” the establishment’s owner once lamented well before the dawn of the digital age.

Right on Wisconsin Avenue, the “Pour House Pub” was a popular haunt for local TV reporters and anchors and professional athletes.  So when football season rolled around, “Dirty Carl” was always on the floor, talking to everybody, gathering information.

I remember two rules Carl had about betting football: 1) Only bet the underdog if you think they can win the game and 2) Don’t try and get “whole” by betting the Monday Night game.

For the last 40 years, my fall weekends have been locked down covering football games all over the country.  I loved it, watching the passion of fans, the competition and the excitement and pageantry of the events.  So when my friend Wooly invited me to Las Vegas for the opening weekend of the NFL, I said yes thinking, “This will be something different.”

Fans paint their faces, wear team colors and yell themselves hoarse during the game.  Reporters are supposed to be dispassionate, watch what happens and ask the questions most fans are wondering about. There’s even a rule posted, “No cheering in the press box.”

Gamblers are looking at numbers. They like the “action.”  Looking for a field goal here, a turnover there, and maybe a bunch of scoring from both teams in the first half to guarantee the “over.”

“Why would you watch the game if you don’t have a bet on it,” my friend Keith has said often.

I found myself last weekend at a sports book in Las Vegas surrounded by guys who had “action” on the games. Most were screaming at the screens arrayed around the front of the room after what seemed to be the most random events.

“That throws the whole line off,” the guy behind me moaned after a missed extra point.  In the first quarter.

After bringing breakfast to my friends at 9:30AM, our version of a “tailgate,” I didn’t leave that room until 6:30 that evening. The cacophony of sound and the visual and mental stimulation was eventually overwhelming.

Looking for some quiet, we went to a nearby restaurant and sat at the bar for dinner.  Of course there was a television there and the Packers/Bears game was showing. We weren’t too interested because we had the Pack, giving seven points, Aaron Rodgers was out of the game and they were already down by 17.  My betting partner and I sat there and watched as Rodgers engineered the greatest comeback of his career, and one of the best in NFL history.  When Green Bay took a 24-23 lead, as a fan, I was very impressed.  As a reporter, I was trying to put it in a historical perspective.  But I forgot, as a gambler, I should have a whole different perspective.

“Good, there’s some time left,” my cohort said as Randall Cobb scored the Packers third TD of the half with just over two minutes left in the game.

“What, you’re a Bears fan now?” I asked sarcastically.

“No stupid,” he scoffed at me. “The Bears will have some plays where Trubisky could do something stupid and we could get a defensive touchdown and a “backdoor” cover,” he explained.

So after watching Rodgers perform one of the great athletic feats in recent memory, my mind switched to rooting for a dumb play by a second year quarterback to grab an extra 200 bucks.

I thought, “This is no way to watch a game!”

But that’s what is happening all around the world with sports betting.  You can get a bet down on just about anything in the UK.  Betting parlors are on every street corner.  Could that be part of the sporting world of the future in the United States?

As the US Supreme Court has ruled that gambling on sports is legal, it’ll be a state-by-state question put to voters and legislatures.  Right now, Nevada, New Jersey and Delaware have legalized sports betting.  In Florida, question three on the November ballot will ask if voters should decide whether gambling should be legalized or the decision should stay with the state lawmakers.

But that doesn’t mean anybody in the forty-seven other states isn’t already betting on games.  Whether it’s an app on your phone or a digital connection to a bookmaker, over $93 billion is estimated to have been bet on college football and the NFL last year, skirting the current laws.

Fantasy giant FanDuel said this week that betting on the NFL in the opening weekend exceeded their projections by 300%.

I enjoyed the weekend with my friends and yes; it was weird not to be at a game on either Saturday or Sunday for the first time in four decades.  But I also found out you have to “stay in the game.”  I liked the camaraderie and the laughs, but fretting whether the Panthers would do something stupid at the end of the game and might not cover or wishing the Vikings would get a late field goal to pad their lead takes some stamina. Not to say It wasn’t fun and I would do it again.

I’m probably not the right personality to be a serious gambler.  I don’t like putting my money on teams I don’t like and I don’t like betting against my favorites.  I guess that’s why every time I was in Las Vegas over the last ten years I put money on the Jaguars to win the Super Bowl.  Which usually brought a laugh from the guys selling me the ticket.

By the way, over the weekend we made thirteen different NFL wagers for a net result of -$14, including the “vig.” Seemed like a lot of work and emotional investment no mater what the total. And I think it’s the first time in my life I didn’t go outside for the entire day.

But the Jaguars made me money.