Yes I said Tiger wouldn’t win again and reiterated that he certainly wouldn’t win a Major for the rest of his career. In the crow-eating category, several of my friends charitable endeavors were bolstered out of my bank account thanks to Tiger winning last year in Atlanta and again at Augusta. I joked with them, being completely facetious, that it was nice that he was able to play in those “small field, invitation only events.” Because he showed something I didn’t think he could summon ever again at that level at the Masters.

But my previous prediction was based on knowing only the “old” Tiger. The sullen, distant, arrogant, phenomenally, dominating Tiger. For as much as his swing changes, injuries, surgeries and personal life have been dissected and analyzed, it’s his transformation of personality that’s most impressive. 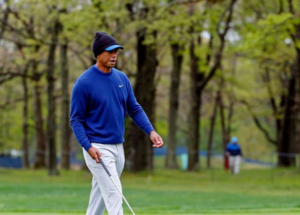 Even after missing the cut at this week’s PGA Championship at Bethpage, Tiger stopped off to talk with the media about his play over the first few days. “I just didn’t play well,” he explained with a smile. Even talking to the media after missing a cut was a rarity in the past. And he admitted players like Brooks Koepka, and Koepka in particular have an advantage over him these days.

“Relative to the field, yes,” Tiger said when asked if he had the same distance advantage when he was in his heyday. “He’s (Koepka) hitting nine-iron when the rest of us are hitting five-iron,” Tiger said, sounding just like everybody talking about competing with him fifteen years ago. “And when he misses, he misses in the right spots where he can still get it on the green.”

You can think, as some purists do, that that’s the problem with golf these days, but no one is more the cause of that than Tiger Woods. He brought athleticism to the game that very few players, Arnold Palmer and Greg Norman come to mind, brought to the professional ranks in the past.

And with payouts and winners checks increasing ten-fold, thanks to Tiger’s popularity and huge television contracts, great athletes that might have chosen other sports are choosing golf. If you met Brooks Koepka and didn’t know who he was and he said he played middle linebacker for the Jaguars, you’d believe him.

Tiger’s been famous since he can remember. His dad had him on the Mike Douglas Show when he was three years old. He played in the LA Open as a 14-year old. So he’s always been the center of attention but has been able to block out the noise and imagine and execute under circumstances where most people couldn’t even take it back.

His well-documented fall from grace in his personal life didn’t take a toll on his psyche on the golf course. He can compartmentalize and distill what’s important and what’s not when he steps between the ropes. The only difference now seems to be the gum chewing. “It curbs my appetite,” he explained.

Thus, 14 Major wins before this year’s Masters for the “old” Tiger. Going into the final round at Augusta this year though he said some things that were very much unlike the old Tiger. He talked about plodding around the course and “hanging in there.” And the way he won was classically “Nicklausonian.” Jack Nicklaus stayed around the leaders and when they would make a mistake, he wouldn’t be overly aggressive, but rather make the smart play to move, and stay, atop the leaderboard. This week, Koepka outlined the 35 or so players in the field of 156 at Bethpage he’d have to beat to win. Nicklaus said many times majors were in some way the easiest to win because so many guys played themselves out of contention.

When the other two guys in his group on Sunday at Augusta hit it in the water at the par three 12th, Tiger aimed over the bunker and hit it in the middle of the green. The only “old” Tiger move was when he walked over the Hogan Bridge to mark his ball and stand and watch while Francesco Molinari and Tony Finau walked over to the drop area. Woods stood on the back of the green with his arms folded, hammering home the idea “I’m here and your not.”

Woods made the expected birdies at 13 and 15 in the final round at the Masters, sandwiched around at par at 14. And the birdie at 16 was similar to what Nicklaus did in 1986. When he hit the shot, his son Jackie, caddying for him said, “Be the right club.” Jack picked up his tee while the ball was in the air (his eyesight was not good enough to follow the ball) and said, “It is.” Tiger watched the ball ‘till it stopped, mouthing “Come on” knowing he hit it just like he wanted. For comparison, Jack hit six iron, Tiger hit eight iron.

I ran into Tiger after a practice session recently away from the PGA Tour and any network coverage.

How’d he do? “Three birdies,” he said with an honest laugh.

We all know people who can have singular focus and get things done we couldn’t imagine. I had a cousin like that. He could lock himself in a room and study and study for hours on end. He was singularly focused on knowing the most he could. He had great grades. One of those guys who studied enough to get 1600 on the SAT’s.

While I still don’t think Tiger will win another Major, I’m impressed with what he’s done in this stage of his career and life. It’ll serve him well no matter how he hits a golf ball.

Odds Against Rookies in the NFL