There’s a prevailing thought that “all jobs are open” during the offseason in the NFL. There are 90 players on every roster once OTA’s start. Eventually that number gets pared down to the 53 on the team when the season starts. That means when the 32 teams get to opening day in September, over a thousand players currently on NFL rosters will be out of a job.

This weekend’s Jaguars rookie mini-camp highlighted the uphill slog for any player trying to break into the league. The reality is that on average, on the final fifty-three-man roster, six rookies might make the team. Factor in the top three or four draft picks will be given a long leash to prove themselves and that leaves two spots for the 62 rookies and first year players to compete for throughout the summer. Seven draft picks, 21 rookie free agents and 28 workout players are included in that number this weekend.

Jaguars Head Coach Doug Marrone knows these facts all too well. Coming out of Syracuse in 1986, Marrone was the 164th player picked in the draft, a sixth round selection of the LA Raiders. They cut him before the season. He sat out in ’86, was with the Dolphins a couple of years and they cut him. Signed with the Cowboys and they cut him on the first day of training camp. Picked up by New Orleans in ’89, Marrone had a meeting with Hall of Fame General Manager Jim Finks at the end of the year when Minnesota offered him more money and a chance. And that conversation impacts what he says to players today.

“I have to be honest,” Marrone recalled Finks telling him. “If you’re playing for us, that means someone got hurt. You’re not good enough to be a starter.”

That’s a pretty harsh assessment and Marrone admits he was not happy leaving that meeting. But he leans on that experience evaluating and talking to players.

“I always admired that at least someone told me the truth. I try to do that,” Marrone said after practice with the rookies this week. “I don’t know if I can tell someone in a short period of time that I think they can’t play in this league. But I can tell them that we feel we have better players.”

“It really doesn’t matter why you are sitting here right now or how you got here,” Marrone told the rookies at their meeting Thursday night. “It’s an opportunity and you never want to waste an opportunity to make a good impression. You are going to have opportunities. Take advantage of it and leave the stuff you can’t control out.” 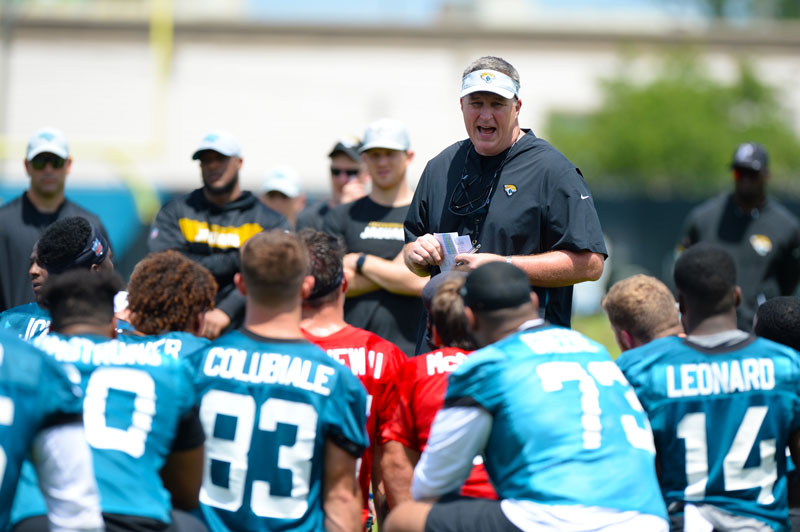 Courtesy of the Jacksonville Jaguars/Rick Wilson

Counting starters and back-ups, draft picks and free agents, the Jaguars have 48 spots “penciled in” of the 53 who will be a part of their quest in 2019. There will be some new faces in new places, but players like Nick Foles, Josh Allen, Chris Conley, Geoff Swaim and Jawaan Taylor will be on the roster come September.

What’s amazing is how great the athletes are who will not make this or any other NFL team. The last man on the roster has been a star at every level, a standout in high school and college. If you saw him in a pickup game, you’d think he was so good it was unfair. He has a case full of trophies, MVP awards and Player of the Year accolades. But in the NFL, none of that matters.

One player trying to make a quick impression is former Alabama cornerback Saivion Smith. Smith was invited to the combine, was projected as a third round pick but never heard his name called. He signed as an undrafted rookie free agent with the Jaguars.

“I was disappointed,” he admitted after practice this week. “Everybody dreams of being drafted. But now I have to know the playbook, what I have to do and play fast. That’s all I can do.”

Looking at Smith’s athletic resume he fits the role of “what are you doing here?” Six feet one, 200 pounds, he’s been a star everywhere, a phenomenal athlete. Rated the best cornerback in the country coming out of high school in Tampa, he signed with LSU, played for Mississippi Gulf Coast CC, played a year at Alabama and then declared for the NFL draft. He’s a shutdown corner who can also hit and returns punts and kicks.

He knows the numbers game he’s in but isn’t focused on it.

“I’ve talked with some of the guys I know on the team, Ronnie Harrison, Leonard Fournette,” he explained. “I tried to know something about what goes on here before I got here. I’m spending some extra time with the coaches and guys I know. I’m trying to control the things I can control.”

That’s an overriding theme for players trying to stick with the Jaguars or any team.

“What I try and do is make sure,” Marrone said, recalling his time as a player “I tell them ‘Don’t look around and put into your mind, ‘Oh, this guy is going to be here.’ You try to get them to understand that they are not only competing with the guys in the room, but they are competing with 31 other teams, too.”

Some dreams will be realized in the next few months, others will be crushed. Both Marrone and Smith are aware of how it happens.

“I’m not ever going to be that guy that sits there and stops somebody’s dream,” Marrone said. “The one thing about this game you have to make sure that you are happy with yourself.”

Marrone left the field after playing in the World League for London, turning down a chance to go back to camp with the Raiders to stay at the Coast Guard Academy and start his coaching career.

“I made that decision,” he explained.

“I’m going to play as hard and fast as I can,” Smith said. “The rest is up to the coaches.”