Now that the city has a new contract with the universities, maybe they’ll put their efforts into making something of the Georgia/Florida weekend. There’s been a tepid move in that direction with a party and a concert but I’m talking about something on a much grander scale. Not Super Bowl grand, but a festival weekend that brings people downtown and entices them to stay rather than tell them to just go home. (Same with Gate River Run weekend.)

It’s a mystery why the City of Jacksonville, from a government standpoint, has always seemed to take the game for granted. Closing streets, bringing in vendors, food trucks and all kinds of entertainment would entertain and contain the fans in town for more than just a football game.

Because it is more than just a football game. It’s a cultural happening.

Private enterprise will make it happen whether the city gets involved or not. School icons Champ Bailey and Danny Wuerffel are already a part of that.

They’re hosting “The Player’s Reception” on Friday night, a tailgate party in the Channel 7 parking lot across the street from the stadium. It’s the third one Bailey has hosted and the first where he and Wuerffel have joined forces.

The idea is to connect former players, fans, and corporate leaders to network, have some fun, raise money for charity and give guys a chance to make a positive transition out of football.

“I was paying attention to business after playing and thinking how can I use the game to give back,” Bailey said this week. “Who can I help by doing this? Getting everybody in the same room: players, fans, and corporate execs. I’ve gotten value and opportunities, in every meeting I’ve ever had. Face to face, that’s important.”

“I have a ton of respect for Champ as a player and a person,” Wuerffel said from Atlanta where he’s the Executive Director of Desire Street Ministries and coming off shoulder surgery. “It’s a way to reconnect with former players and engage with fans and help some guys.”

Bailey, a Pro Football Hall of Famer and Wuerffel, a Heisman Trophy winner, acknowledge the transition out of football, no matter when it stops, is a tough one. Bailey says giving guys a chance to connect with other players and business leaders equates to “local hero marketing.”

“It dominates your life,” Champ said of playing football at a high level. “If you’re not consumed with the game you don’t have a chance to be a great player. But it gets in the way of learning something new outside of football. You need to know the impact you’ve had and how that provides other opportunities.”

“When everything is going for you, it’s easy to get caught up in the ride of it,” Wuerffel added. “It’s a tough transition. Whether it’s high school, college or the NFL. So much of your life is tied up in this one activity. How do you navigate forward?”

Wuerffel is no stranger to using the popularity of the Florida/Georgia game to raise money and awareness for Desire Street Ministries. The 9th annual “desire cup” golf tournament will be contested this Friday at the TPC at Sawgrass with a dinner Thursday night.

“The momentum around the Florida/Georgia game give us a chance to achieve our goals,” Wuerffel said. The tournament is sold out but their fundraising continues with a “19th hole donation” available on the ministry’s website.

Neither Danny nor Champ knew much about the legendary tailgating going on at the game. As players they knew the hotel, the bus and the inside of the stadium. Because he was playing, Bailey said last year was the first time he had been to a tailgate.

“I had never been to Georgia/Florida,” he explained. “I had never tailgated because I was playing. I got to see so many people I hadn’t seen. That rivalry is so big, a lot of different people are going to be there.”

“It’s got that combination of significance in the SEC, the fans are extra hyped, and it’s in Jacksonville,” Wuerffel said. “I was less in tune with the peripheral stuff. I felt more uniqueness as a fan after I was finished playing in the game.”

His first trip to the game brought a quick awareness to the uniqueness and sheer scope of what happens before kickoff.

“I came in on a boat,” he recalled, getting off at Metropolitan Park. “I still had to get over to the stadium. Back then, I couldn’t walk anywhere without Gator fans converging on me. I put some pom-poms in my hat so It looked like I had long hair. I think I put on sunglasses. I put a big hood over the hat. It was wild.”

Having very different experiences as players in the game didn’t diminish their respect for the contest. Wuerffel was 4-0 against Georgia. Bailey went 1-2 against the Gators with an interception. “They were just better than us,” Bailey explained. “Spurrier had it figured out.”

Growing up in Folkston, Bailey was well aware of the rivalry from an early age. He went to the game once when his older brother Ron was on the Bulldogs roster.

“That rivalry meant something on the border,” Champ said. “There are a lot of Gator fans in my home town. My idols went to Florida. But I was always a Bulldog. It meant something to me since I can remember football.”

Both Wuerffel and Bailey think playing in Gainesville and Athens are the best home venues there are. But both said this game should stay in Jacksonville.

“It’s a unique thing,” Wuerffel explained. “It’s more convenient for Florida fans I know. You play plenty of home and away games in your career. Not many opportunities to play a neutral site game.”

“To be able to play in it and now go to it. I hope it never leaves Jacksonville,” he said. “That location on the river, it’s something special. I’m interested in that game thriving. I’m interested that town thriving. I basically grew up there.” 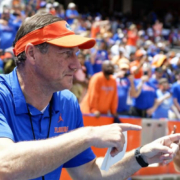 Minshew or Foles? No Rush
Scroll to top