There was a lot of talk this week about what you can and can’t do at The Players Championship.

First of all, you can get a ticket. Even with just about eight-thousand tickets sold there were enough floating around that if you wanted to see some golf, you could get out there. If you really wanted to go today, you can find one.

What you can’t do is walk around without a mask. There were a variety of “spectator ambassadors” on the grounds wearing very official looking vests and carrying those golf signs that used to say, “Quiet,” but now said, “Masks.” I suppose it was a polite way to nudge people to put their masks on despite the eating and drinking that usually goes on at The Players.

What you can do is marvel at how green the grass is all over the place. I don’t know what the rye grass seed bill was this year but whatever it was it was worth it. Every blade of grass was a green as could be, from tees to fairways to the putting surfaces and out to the rough, the spectator areas and even along the walkways to the parking lots.

If it looked manicured, it’s because it was. The Players agronomy staff used twenty-four, twenty-inch hand mowers to cut the rough on Tuesday and left it alone for the rest of the tournament. It took twenty-four workers walking behind the mowers, five hours to cut fifty acres of primary rough. And you thought your Saturday lawn duties were tough.

This is the fortieth Players Championship I’ve covered, all of them at the Stadium Course,t and it’s a far cry from when the tournament began there in 1982. There are places you can play from now where you wouldn’t even walk back then.

“We really didn’t have money for maintenance,” former PGA Tour Commissioner Deane Beman explained. “We had enough to maintain the tees, fairway and greens and that was it. Even the goats were leased.”

To the left of the thirteenth hole was a large island that had a lot of scrub brush that needed to be cleaned out, but the Tour didn’t have the money to get it done. So, they leased a trip of goats (yep, that’s what a bunch of goats are called) to clear the place out.

One night a valve that controls the water level on the course was left open and the goats crossed off the island and found a new thing to much on: the cedar shake roof shingles on the Stadium Course’s new clubhouse.

When the staff discovered what had happened, they were terrified at what Beman’s reaction might be. But in a stroke of genius, when he arrived to see the goats on the roof he said, “Where’s the cameras?” Beman realized it was a public relations bonanza to show the goats munching away.

As a player, crossing from the par three, thirteenth green to the fourteenth tee there used to be a giant corrugated pipe you drove your cart through, tunneling under the spectator mound that was built there. You never knew what you might encounter as you emerged from the pipe. Before the Sawgrass Marriott was built, all of that was swamp land and was ruled by wild things. More than once a twelve-foot gator was using the fourteenth tee as a sunning ground, only to walk off, clearly annoyed, when a foursome appeared.

This week the PGA Tour also told Bryson DeChambeau that he can’t just make up his own golf course along the way. After winning at Bay Hill, DeChambeau was asked how he might use his prodigious length to take advantage of the Stadium Course. A real “out of the fairway” thinker, Bryson said he might just hit his tee shot on eighteen over the pond to the left and come in from there. “It’s a better angle,” he said. Under the guise of “player and spectator safety,” the Tour quickly instituted an ‘internal out of bounds’ on that side of the lake, preventing DeChambeau and the rest of the bombers out there these days from straying from Pete Dye’s original plan.

There are a few other things you can’t do that are part of The Players history.

You used to be able to stand at the clubhouse and see what was going on at seventeen just calculating the size of the gallery there. No more. Hospitality chalets surrounding seventeen mean you can’t see down there from the clubhouse anymore.

Remember in 1987 when FSU student Hal Valdez jumped into the water on seventeen just as Jeff Sluman was lining up a six-foot birdie putt for a win in a playoff over Sandy Lyle? Valdez jumped in on a dare from his fraternity brothers. He wouldn’t be able to do that today. Fans aren’t allowed in that spot anymore. I guess he could get a running start and do a half gainer from the second story of the Michelob Ultra Lounge behind the green. But don’t get any ideas.

In 1988 as Mark McCumber was walking down the eighteenth fairway in the final round, some fans unfurled a banner saying something like, “Mark McCumber, Jacksonville’s Hometown Champion.” They’d have to find a new spot to do that this year. A very nice hospitality chalet spans the hill between nine and eighteen with great views of both holes.

The whole practice area-putting green-first tee-second green-third tee area is something you can appreciate as a sports fan. The revamped design there gives spectators a chance to see a half dozen different things going on with just a turn of the head or a twenty-step walk. And there’s beer, cocktails and snacks nearby. No wonder that’s a popular spot.

You can see the best players in the world competing for the best prize money against the best field in your own backyard just by flipping on your television. It’s fun to see a big focus of the sports world happening just down the street.

“We want this to be the best of everything we can offer,” The Players Executive Director Jared Rice said. “Our community is a huge part of what we do. It’s what makes us one of one. It’s important that we stay connected and engaged.”

You probably can’t throw the Commissioner in the water after you win any more either. When Jerry Pate was walking down the eighteenth getting ready to win the inaugural Players Championship at the Stadium Course in 1982, he had decided to throw course architect Pete Dye in the water next to the green. Deane Beman happened to be standing there, so he threw him in too. Then did a swan dive off the bulkhead himself.

Forty years later, might this year’s winner grab the Commissioner and throw him in? Probably not.

But, I don’t think as good of shape all of these guys are in, if one of them goes super low and decides to grab Jay Monahan and toss him in the lake, there wouldn’t be much Monahan could do about it.

Could be fun though. 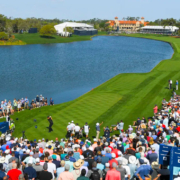 On The World Stage, THE PLAYERS Is Still Ours

The Roll Continues With Gate River Run
Scroll to top