We’ve been on quite a run in Florida and especially North Florida in the first quarter of 2021. It started with the Jaguars hiring Urban Meyer on January 14th. While sports fans in general and Jaguars fans specifically are split on Meyer and his potential for success in professional football, Meyer’s hiring put the focus of the football world squarely on Jacksonville. The national media fawned over Shad Khan’s courtship and eventual hiring of Meyer.

As the political debate regarding how to deal with the pandemic raged on, Tampa hosted the Super Bowl, with limited fan capacity. The Bucs became the first team to play in the Super Bowl in their home stadium and beat the Chiefs for the NFL title. Tom Brady’s subsequent Lombardi Trophy toss from boat to boat seemed to immediately qualify him for “Florida Man” status

It seemed Brady had barely sobered up when the focus shifted to Daytona for Speedweeks and the Daytona 500. With a huge venue, again spectators were allowed in a limited capacity and the Great American Race as well as the road race the following week went off without a hitch.

Because it’s been such a strange year, college basketball seems a bit diminished and there’s less focus on the NCAA Tournament and March Madness.

So, while Florida and Florida State were both fighting for spots in the post-season, The Players grabbed the spotlight for the sports world for an entire week. NBC promotes The Players as one of the jewels of their sports coverage so when the tournament rolls around, it gets plenty of scrutiny.

This year it held up and more.

The golf course was pristine, the competition was tight, and a worthy champion emerged in Justin Thomas. While The Players does identify the best player through his bag that week, you can only have so many Stephen Ames’ win your tournament and be taken seriously as a significant event on the golf calendar.

That’s why it’s important that Jack Nicklaus, Tiger Woods, Phil Mickelson, Sergio Garcia, Rory McIlroy and now Justin Thomas have their names on the trophy. All Major winners, all add stature to The Players.

And while NFL free agency rolls on this week, a portion of the sports world still had its eye on Jacksonville for the Gate River Run.

Last year the Gate River Run got just inside the window of events shutting down because of the spread of Covid-19.

“We were lucky,” race director Doug Alred said of the 2020 race. “If we were scheduled for two days later, we’d have had to call it off. When The Players announced their date, we had to move up a week. We ended up being lucky and they weren’t.”

Through the height of the pandemic, Alred and other race organizers around the country figured out how to host races and runs in a safe and comfortable manner for the participants.

“We tested things in the smaller races to see how it would go,” he explained. “That’s how we came up with our plan for the 8,000 runners for Gate River Run.”

There were unexpected challenges as well. In a normal year, everybody, nearly 25,000 runners in the combined events, shows up at the runner’s expo on Thursday and Friday to pick up their race packets. This year, to accommodate social distancing, participants had to register for a one-hour time slot over three days to get their packet.

Runners had to wear a mask to pick up their packet, and at the start/finish lines.

“We started people staggered in our smaller races,” Alred said. “Our goal was to keep people from being too close. Eight waves with anywhere from 800 to 1500 runners. We had two starting lines; staging areas based on race number.”

The water stations in the smaller races had eight-ounce bottles but that wasn’t feasible for a race the size of the Gate.

“We just decided to go with regular water stations,” Doug said. “All of our volunteers wore gloves and masks.”

Once runners get past the starting line, they didn’t have to wear their masks, but there’s no way to keep them apart while running.

“We’re hoping that they are spread out on the course,” Alred added. “We didn’t have any post-race or awards or ceremonies. When they got to the back of the finish line, we told them they can go home.”

Organizers tried to keep the race/run itself as normal as possible with the same course and bands sprinkled along the 9.3 miles for entertainment. But Alred wasn’t even sure if he scheduled the race that anybody would show up.

“My biggest concern was whether people would sign up,” he explained. “That’s one of the reasons we picked just over 8,000. The first day we were open for registration we had 4,500. We probably could have had over 10,000 in the 15K. The 5K is smaller, those people are probably staying home. Our sponsors stuck with us though and that helped a lot.”

Along with the community event, the Gate River Run will also still serve as the US National 15K Championship again this year. That means following all of the USA Track and Field covid protocols for the elite runners.

“We had to almost isolate them,” Doug said. “We put them all at the fairgrounds. Straight there from the hotel, then directly to the start line, and they were all blocked off. This year we started the women and then the elite men and then a couple of minutes later we started the rest of the field.”

In chilly and blustery conditions yesterday, Emily Sisson dominated the women’s field in 48:09, the fifth fastest women’s time in the race’s forty-four years. She was also the first person to cross the finish line claiming the $5,000 equalizer bonus. It was 52 degrees at race time with winds as high as 30 mph atop the Hart Bridge.

Only eleven seconds separated the top nine men in the closest finish in Gate River Run history, with Clayton Young outkicking the field to win by two seconds in 43.:52.

Having the 15K national championship and the elite runners that come with it is an important component of the Gate River Run’s success. The Gate used to compete with the Gasparilla Run in Tampa but once the Gate organizers chose to host the national title, the two races went in different directions. Gasparilla didn’t want to pay prize money and their registrations dwindled.

“They eventually reinstituted prize money and they’re on their way back,” Alred said. “But when you don’t have national media attention because you don’t have the big names it changes the race.”

It was a fortuitous decision to take on the National Championship. Elite runners all over the world refer to our River Run as simply, “The Gate.” And with this being an Olympic year, the elite runners were testing their form on the streets of Jacksonville.

As the first major running event to be held since the beginning of the pandemic, the Gate, and the organizers literally blazed a trail showing how to get it done.

“We’ve done everything we need to do,” Doug said. “I think Jacksonville will be proud about what we accomplished. It looks like New York and Boston will bring their races back (marathons), but they might have read our playbook. Our Jacksonville Track Club was in a good enough financial position to take a hit on the race this year. Races like the New York marathon can’t afford to cut out half of the runners. Their budgets are too big. We’ll see what happens.” 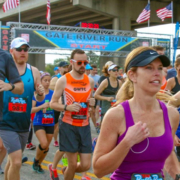 Would You Run or Ride