This would seem to be a week all about golf here in North Florida. With The Players being contested at PGA Tour’s Stadium Course in Ponte Vedra, the best players in the world will be playing for the largest prize money total in golf, $15 million, with $2.7 million going to the winner.

This week involves a golf tournament. Most of the people who will go to the tournament, volunteer, or watch it on TV play golf. All of them know a lot about golf. But this week is not only all about golf.

You could call it the continuation of a love story.

Although the PGA Tour uses The Players as its signature event, The Players is still, on many levels, the Greater Jacksonville Open. Watching the golf on TV, there will be a few mentions of Jacksonville, but the focus will be, and rightly so, on the competition inside the ropes. But if you’re at the tournament, you can watch some golf, but the stories outside the ropes are more about community, giving, family, fellowship and charity.

Through years of promotion, the PGA Tour has successfully brought the tournament to the national and international stage. This year, fans outside of the local six county area will purchase more than fifty percent of the tickets sold for the week. For a while, the Tour disassociated The Players with the local fans, trying to make it a destination for golf fans from around the country and around the world. While a laudable goal, they realized that their ties with North Florida couldn’t be discounted or replaced. In the last few years, they’ve repaired their bond with North Florida. If half of the fans are from somewhere else, that means half of them are from here.

How else would an idea of bringing Arnold Palmer to town for a golf tournament that was an adjunct to a football game in the mid-1960’s lead to over $100 million donated to local charities in the next 60 years?

Most of the more than two thousand volunteers are from here. The idea of getting people together to volunteer and help run the golf tournament started here. The fact that the PGA Tour operates events to benefit charity has part of that idea rooted in the $19,000 the original GJO donated to the Junior League and their charities in 1965.

In Jacksonville, golf brought the whole community together.

Wesley Paxson asked John Tucker, his regular golf partner at San Jose, to see if he couldn’t get a big name player for the Gator Bowl Pro-Am to raise the profile of the annual tournament. Paxson was going to be the President of the Gator Bowl and asked Tucker, only because John had free long distance calling as the District Manager of the phone company. That was a big deal at the time.

Through a series of events, and long-distance phone calls, Tucker secured a full-fledged professional golf event with an unheard-of $50,000 guaranteed prize money.

They didn’t have the money, a golf course or any idea of how to run a golf tournament.

Not a problem. They had friends.

Meeting at Silver’s Drug Store in Jacksonville Beach, Paxson, Tucker and a few friends asked a few more of their friends to get involved. They asked the Times-Union to put up the $50,000. Their friends donated everything, from courtesy cars, to rope to steel poles. They amassed a cadre of volunteers and the Greater Jacksonville Open, with a sense of community ownership, was born at Selva Marina.

Those things aren’t all supposed to happen together. But they did. If it seems like luck, the success of the GJO and now THE PLAYERS follow all of the notions about good fortune: The harder you work, the luckier you get. Add one more idea to that: love what you do and the people you’re doing it with.

With foresight unknown even to them, the GJO leadership invited everybody to get involved. They invited groups from Hidden Hills, Deerwood, Timiquana, and Ponte Vedra and all over the city.

Golf might have connected all of these people but it was a sense of community, a sense of ownership and fellowship that brought them all together. New chairmen brought new friends and new ideas. No turf guarding, no agendas except to get better every year.

The Swinger’s Tent was born. The hospitality tents grew. The gallery swelled. From $19,000 in the first year, money raised for charities in North Florida multiplied each spring.

The committees, the volunteers and eventually the Honorable Company of Redcoats, the leaders of the volunteer force, came to define what made this community special.

It became THE event of the year where the community came together to have some fun and raise money for charity.

And the PGA TOUR noticed.

Then-Commissioner Deane Beman took notice of the growing volunteer force, the interest in the tournament and the players enthusiasm for coming here and saw the perfect spot to grow the game of professional golf.

And again, the community, and not just the golf community, in Jacksonville and all over North Florida responded.

From a local event, Jacksonville’s community golf tournament cascaded into the Tournament Players Championship, the Senior TPC and eventually The PLAYERS, the signature event of the PGA TOUR. All thanks to the time, energy and commitment from the volunteers and their leadership. The sense of community and ownership of the tournament was unmatched anywhere else.

The Stadium Course was built. Beman, architect Pete Dye and champion Jerry Pate ended up in the water.
A sleepy stretch of beach called Ponte Vedra, framed by Butler Boulevard to the north and Sawgrass Country Club to the south, was transformed into a vibrant, growing community.

Want to know what Jacksonville and North Florida are about? Spend some time with the volunteers at THE PLAYERS. Listen to the Redcoats, who can recount, in detail, their years leading the tournament. They mostly talk about the other volunteers who make this all possible.

It’s best defined by the first Redcoat, John Tucker who called THE PLAYERS “a ‘WE’ undertaking.”

Author’s Note: This column, in large part, is contained in the foreword to the book “The Honorable Company of Past Chairmen” a look at each year of the GJO and The PLAYERS through the eyes of each of the leaders of the volunteers of the tournament, published by Hartley Press. It will be available in the volunteer areas of THE PLAYERS this week for $40 and at Redcoatfoundation.org. All proceeds will go to the Redcoats Foundation and their various local charities. 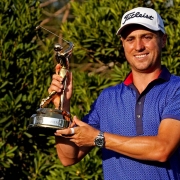 We’ll Get Through This
Scroll to top