Last week’s column about the Jaguars future elicited the full gamut of responses. From “I agree” to “stop drinking and writing,” fans are clearly passionate about what the team should do going forward. A friend of mine once said, “When the reader agrees with you, they’re brilliant. When they disagree, you’re an idiot.” My favorite was “You make a lot of good points but the p****ed off side of me says fire them all.” Because that’s the emotional sentiment of a large part of the Jaguars fan base. 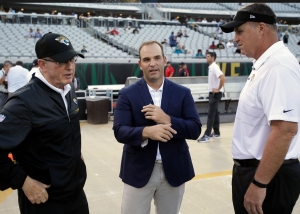 Either way, the Jaguars offseason moves have started with keeping the top brass and firing four assistant coaches, all in positions that underperformed this year.

It’s an important year for everybody involved with the football side of the Jaguars, from the top down. While Tom Coughlin, Dave Caldwell and Doug Marrone have been given a vote of confidence by Owner Shad Khan, another year like this one and they’re all gone.

It’s not the 5-11 record that’s so galling; it’s how they got there after an appearance in the AFC Championship game the year before. Yes, injuries played a large part in the Jaguars downfall on offense, but did the lack of production on that side of the ball cause so much locker room discord that the team became totally dysfunctional?

There was a screaming match in the locker room between defensive and offensive players following the loss to Houston at home in week seven. It went on for a while; forcing the Jaguars PR staff to push the media back out into the hallway past the normal “cooling off” post-game period.

So does all of what happened this year impact the decision-making in the offseason? If the team’s commitment to Blake Bortles is perceived as a lack of commitment to winning in the locker room, will that force their hand when deciding about what to do at quarterback?

While the player’s pettiness, lack of leadership and inability to handle success contributed to the Jaguars 2018 downfall, Coughlin has to shoulder some of the blame as well. Dave Caldwell is handling the day-to-day operations as General Manager, but nothing is happening without Coughlin’s approval. Same with Marrone. He might be making the calls as the Head Coach but he’s not doing anything without running it by Coughlin first.

“We believe in the player,” is how Coughlin characterized their commitment to Blake and not addressing the quarterback position in the last couple of years outside of Tanner Lee with their sixth round pick in 2018.

I’m not a fan of where you look at who they could have picked instead of whom they did. The draft picks and the free agent signings were made based on what they already had on the team and what they thought would augment their success. You can’t cherry pick in each draft who they might have taken without looking at the whole picture.

The extension given to Bortles colored their decisions across the board and if they think that’s the problem, they only have one year to fix it. If the players on the team don’t believe in Blake, the brass has to know that and make their decisions accordingly.

In his first stint at running the Jaguars, Coughlin had full control, running the personnel and football operations as the head coach and the general manager. Wayne Weaver has said his biggest mistake as Jaguars owner was getting rid of Coughlin but that’s a bit of revisionist history. Nobody was going to buy a ticket to a Tom Coughlin-coached team at the time and Weaver never broached splitting the job up as an idea. Doubtful Coughlin would have gone for it, but eventually he did take the head-coaching job with the Giants, working with General Managers Ernie Acorsi and Jerry Reese. Two Super Bowl victories followed.

As the Jaguars personnel chief this time around, Coughlin’s drafts have been spotty. With the jury still out on Leonard Fournette and Cam Robinson injured, Dede Westbrook appears to be the only emerging star from Tom’s 2017 picks. Taking Taven Bryan with the first pick in 2018 was adding to an already perceived strength on the defensive line. Bryan wasn’t an impact player, as you would expect a first round selection to be, getting his only sack of the year in the season finale at Houston. Perhaps DJ Chark becomes the playmaker the Jaguars need, but that didn’t happen in 2018. Ronnie Harrison, Will Richardson, Leon Jacobs and Logan Cooke could all become regular starters in Jacksonville.

This is a “can’t miss” offseason. As in, the Jaguars “can’t miss” at all across the board in the draft or in free agency. While all decisions will be made based on what they’re going to do at quarterback, their subsequent moves will determine the near future success, or lack of it for the Jaguars. They can’t take any flyers, or have the luxury of adding to an already strong position group. Without immediate impact from the players acquired in this offseason, they’ll have to blow the whole thing up and start over again.

Episode 39 – Culture Change Starts at the Top
Scroll to top