It was always former PGA Tour Commissioner Deane Beman’s idea that The Players Championship would be the first “significant” golf tournament of the year. Playing the tournament in March in Florida would kick off the golf season and eventually The Players would be the “first major” on the calendar.

Although it is showcased as the first big test of the best players in the world, The Players hasn’t received “Major” status. The TPC Stadium Course at Sawgrass showed magnificently just three weeks ago with a fitting champion in Justin Thomas but it’s still not considered a Major.

The “First Major” title still belongs to The Masters.

Because of the pandemic, The Masters was the last Major played in 2020 and will be the first played in 2021. Less than five months separate last year’s tournament from this week’s competition at Augusta National. Dustin Johnson has reigned as the current Masters champion for the shortest period in the tournament’s history. Compare that to The (British) Open Championship, where Shane Lowry will have been known as the “Champion Golfer of the Year” for two full years because of last year’s cancellation.

Johnson and Lowry are among the ninety players invited for the Masters, although it’s unclear how many will actually tee it up on Thursday. Johnson won the tournament in November with a record 20-under finish. The conditions this week most likely won’t allow this year’s winner to approach that number.

“Yeah, I think it will be back to feeling like a normal Masters. Obviously last year, there was nothing normal about last year, for the whole year, really,” Johnson said. “I think this year in April, the Masters will feel like it’s back, and it will feel the same. I’m definitely looking forward to that.”

Fans will be back at The Masters in a limited capacity this year. The par-three tournament will be back on Wednesday with patrons. Masks required.

And while there are protests scheduled for outside the gates of Augusta National, eighty-six year old Lee Elder, the first Black man to play in The Masters will join former champions Jack Nicklaus and Gary Player hitting a ceremonial initial shot at the first tee Thursday opening the tournament.

The 85th installment of The Masters will mark the 60th anniversary of Gary Player’s first Green Jacket in 1961. Player competed in fifty-two Masters, the most ever, finishing his competitive rounds at Augusta in 2009.

That’s why watching The Masters each April can be so interesting on two fronts. There aren’t any other sporting events where the prize is so coveted but the past is still on display.

Arnold Palmer played in fifty Masters, the most consecutive ever. Palmer had said he’d play Augusta National “As long as I can hit fifteen in two.” He stopped in 2004. Jack Nicklaus stopped the next year after forty-five appearances and six Green Jackets.

I remember walking with Sam Snead from the 18th green to the clubhouse in 1983 when he said, “I think that’s it for me.” And with that he was done after 44 appearances and three victories at Augusta National. I was dumbfounded.

Media coverage was very different then and especially for golf, pre-Tiger. No big announcement, Snead just said to three or four of us walking with him, “I’m done.”

“I can still play this golf course,” 1992 champion Fred Couples told me during a practice round with Tiger Woods and Adam Scott last November.

Standing on the tenth tee, Scott and Woods hit three-woods down the hill on the long, 495 yard, par four.
Couples, who’s length off the tee contributed to his “Boom Boom” nickname, hit driver.

“The key is to hit the right clubs into these greens,” he explained. “I’m long enough that I can still do that. Some guys can’t.”
Fred uses the 18th hole as a prime example of his ability to still play Augusta National. How he plays that hole will determine how long he’ll continue to compete at the Masters every April.

“I used to hit driver and a short iron in there,” he said of the 465-yard uphill par 4 known as “Holly.” “Even though it’s longer now, I can still hit a short iron in there with how long I still hit it,’ alluding to the distance gained through new equipment technology. “Once guys start having to hit hybrid into that green, they don’t have much of a chance.”

Adding length to the golf course has made a test for players in the modern game, but for others, it’s eliminated them as actual competitors. As an example, Augusta National played at 6,925 yards in 1994. This year it will be 550 yards longer.

And confounding that theory, Bernhard Langer made the cut last year at 63-years old, the oldest player to ever do so.
“I am hitting a lot of 2- and 3-hybrids on holes where the younger guys are hitting 8- and 9-irons into the greens,” Langer told Golf Digest. “So, it’s a big challenge for me.”

Langer admitted to hitting 3-wood into the par four fifth hole each day last November. No matter. Paired with Bryson DeChambeau, the longest hitter in the game, Langer bested him by two strokes in the final round.

“There’s a definite advantage from playing that course 100 times or more,” Langer explained. Sometimes it is better to be 20 yards short than three feet long. When I was paired with Bryson he missed in the wrong places. It often comes down to a matter of inches. He’d almost hit a good shot, but it wasn’t.”

Figuring out how to play Augusta National under tournament conditions is nothing new. Dustin Johnson carrying a 7-wood in his bag in November was much discussed as a key to his victory. Years earlier, Raymond Floyd famously carried a 5-wood during his 1976 victory, putting the club in play for that week to try and tame the par-5’s.

It’s one of the things that makes The Masters so compelling. The history of the game is often written there. Or is it because it happened at The Masters, it becomes part of history?

Tiger Woods’ famous chip in on sixteen in 2005 on his way to victory is one of the most celebrated golf shots ever. Barely anybody remembers Davis Love III making almost the exact same shot three years earlier on sixteen. Because he didn’t go on to win. And he’s not Tiger.

Is Gene Sarazen’s double-eagle in the 1935 Masters on fifteen bigger than Harris English’s same score on eleven at last year’s Players? We have only O.B. Keeler’s newspaper account of Sarazen’s feat, written in the daily paper while there’s very clear video of English and his two.

Of course it is. Sarazen went on to win.

And it happened at The Masters. 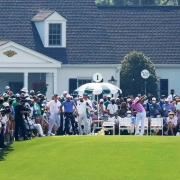 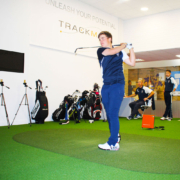 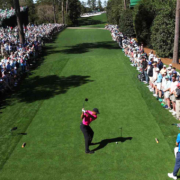