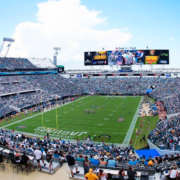 In the forty-three years I’ve been working in this business, when asked what I do, or when I’ve had to fill out a form with an “occupation,” slot on it, I’ve always said, “Reporter” or “Journalist.” Sadly, I know a lot of journalism is now tainted with partisan opinion, or has disappeared completely. But in the sports world, sports journalism, real reporting, still survives.

As with every other job, sports reporters have had to adapt to the pandemic, cobbling together stories virtually and otherwise. It’s a whole new way to work and cover a team.

Sports journalism is still about building relationships. Earning the trust of players, coaches and administrators in order to give context to your reporting.

And all of that has changed this year.

Almost all of the contact the media has this year with an NFL team is virtual, originally through Zoom calls and now through Microsoft Teams. It’s been a good work-around developed by the league.

“All of the media policies have come from the league and the NFL Players Association,” Jaguars Senior Director of Communications Dan Edwards explained. “They started formulating what they were going to do in March and came up with a plan in July. But we still get weekly updates.”

Edwards is one of the original Jaguars employees and is among the best in the business at his job across all sports. He hasn’t gotten any pushback from the local media on the “how-to” of doing their jobs. Part of that is the respect Dan commands doing his job, the other is just reality.

“We haven’t gotten any pushback from the Pro Football Writers Association or any of our local media,” Edwards explained. “They understand the circumstances. They saw Major League Baseball, the NBA and the NHL and what they were doing. The only way to get through this was to watch other leagues and see what worked. Give the media credit, they understand it’s a different year.”

A few years ago, after a regular press conference at the stadium with the assembled media, I was walking down the hall with the Jaguars Head Coach as he headed to the locker room. I casually asked, “What’s the matter with so-and-so?”

He looked over his shoulder, turned back to me and said, “You know he can’t play at all, right?”

That quick conversation is something I could never report, having earned the trust of the Head Coach, but it helped in every story about the team, that position group and that player going forward, knowing that they knew. He couldn’t play at all.

“It’s been difficult without that locker room,” Times-Union Jaguars beat reporter John Reid explained. “You can’t establish any kind of relationship with the players, especially the rookies. Training camp was different. In the past I could rely on talking to players off the side. This is probably the most difficult of years.”

Reid has been a sportswriter for more than three decades. As the beat reporter in New Orleans for the NBA’s Hornets, he followed them to Oklahoma City for two years from 2005-2007 when Hurricane Katrina wrecked the Crescent City. Reporting from afar for the New Orleans paper over two seasons, Reid says covering the Jaguars amid the pandemic this year has been equally tough.

“We have two problems here,” he said of covering the 2020 Jaguars. “When they lose as often as they do, there’s not a lot of storylines. They’re 1-6 and we’re still trying to move the needle forward.

Reid also says nothing replaces standing and talking to players face-to-face. He pointed to the Jalen Ramsey drama last year as a case in point, saying if you weren’t in the locker room after that Texans game in Houston when all of that stuff was going on, you’d have no feel of what was happening. With visiting media not allowed to travel, we’d have all missed it this year.

“I miss that locker room, you can’t talk to guys,” Mike said. “It’s all done on a ‘Teams’ call. The job is about developing relationships. I haven’t even met any of the rookies.”

“You develop relationships, guys you can count on to tell you the truth,” he added. “Those small conversations you have in the locker room with guys away from the cameras and other reporters. It’s the most important information you can’t write about, but it shapes how you write your stories. That’s the gold stuff.”

I used to trade stories and laughs with Mike after the “media time” at the stadium, getting some background from another reporter I respected and perhaps some perspective I hadn’t considered. None of that is possible this season. You can’t replicate the camaraderie you develop as part of the daily media corps.

“We’d all come off the field after practice or from the locker room after games or after the media time in the locker room and get to work,” Mike lamented. “Now I just get on the Zoom call and take the dog for a walk.”

In his thirty-four years in local television and radio, Dan Hicken admitted he hasn’t seen anything like this year. Dan and I worked together early in his career and have remained friends, colleagues and competitors for what seems like forever. We agreed, hosting sports specials on television, involving the players as guests and hosts, gave us a chance to gain some insight on what’s going on.

“We had Chris Conely on our Monday night show last year and he was great and a great guy. You could pick his brain afterwards and he’d have great insight. This year it’s just us (Dan and Brent Martineau) so that’s so different. Brent has Josh Allen on Thursday nights but it’s a Zoom call! You can’t talk to him afterwards to get some perspective.”

Perhaps there’s no more fertile ground for information than in a post-game locker room. Win or lose, players are always willing to explain what actually happened.

“Guys seem more free at that point, after a win or a tough loss,” Reid added. “To make your story different, you have to capture the emotion of the players. Without being there you can’t build your story around those emotions.”

Building stories off the emotions of the players, especially when those emotions are still evident, is the stock and trade of a good reporter.

“Even though there’s a cooling off period (twelve minutes), after the game on Sunday’s there’s enough of the moment still lingering that you can tell, you can see and feel what’s going on,” Hicken agreed. “That raw emotion is there. That’s missing on those virtual calls after the game.”

But everybody is in the same boat. We’re all watching the TV broadcast like the fans at home. There’s no ability to see something develop away from the ball while sitting in the press box.

The visiting radio broadcast teams are also staying home. The league has helped them get the video feeds they need but the radio broadcasts are basically coming from the announcers watching the game on TV.

“Very few one on one interviews are happening and all of them are virtual,” Edwards explained. “Even the network crews doing the games on Sunday, their meetings with the coaches and the players on Thursday: They’re all done virtually.”

One thing that has changed recently is the makeup of the press corps covering the team. The crowd of newspaper and magazine writers along with TV reporters have been augmented with website and blog personnel.

“The biggest change is how coverage has gone digital,” explained Edwards, whose career included a stint with the Steelers. “Websites like The Maven and The Athletic are covering sports regularly and they’re now part of the regular coverage. Blogs who cover the team locally on a year-round basis, we credential them as well.”

As sports news consumers have transitioned to getting their information online, news outlets have had to adapt. In the last three or four years, reporters have found that a story will develop from a player’s social media post.

“Without access, sometimes that’s the only way we know anything about their actions,” Reid explained. “Four years ago, I had an editor say, ‘make sure you follow every players’ social media.’ A lot of those guys are using their social media posts rather than talking to us. Especially in the off season.”

Citing the Twitter spat between Tony Khan and Yannick Ngakoue, DiRocco say sometimes that’s where news is made, and it requires coverage.

“Like when Gardner (Minshew) documented his RV trip on social media,” “DiRocco said. “Or if somebody posts something controversial. I have to monitor all of their accounts. I have alerts on all of their tweets, so my phone is constantly going off.”

As the business changes, everybody adapts. It’ll be interesting to see if any of these ‘virtual’ situations creep into sports coverage in the future. Does the locker room become off limits to the media like it is in college?

Dan Hicken and I agreed that if any league ‘gets it’ it’s the NFL. They stay in the fans consciousness by always being there with national and local coverage.

But for now, everybody’s at arm’s length.

“Everybody’s doing the best they can but it’s the situation we’re all in,” Hicken said with a laugh. “It’s a billion-dollar industry they’re trying to protect and rightly so. The last thing they need is one of us walking in there and spreading something around.”