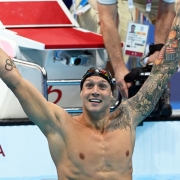 Flipping through the channels the other night I came across some diving. Any other time in the last four years I’d have kept searching. But not this year. This year is the Olympic Year. And I unapologetically think the Olympics are great.

I’ve been to a couple of Olympics. I took my kids to Atlanta in 1996 to experience the competition and the mixing of cultures and people that goes along with the Games. I’d always wanted to see a Winter Olympics in Europe, so in 2006, I accompanied my brother to the Games in Torino, Italy. It was everything I had hoped. People from all over the world gathered in one spot, watching, learning, interacting and proudly supporting their country and the athletes wearing their flag.

“Did I ever jump off the 10-meter platform when we swam in the Olympic pool in Munich,” I asked my favorite Jaguar fan in the other room a couple of nights ago.

As she walked in behind me, she saw I was watching diving. I turned back as she deadpanned, “Probably,” and left the room.

Watching the Olympics gives me the chance to see all kinds of sports I don’t see, nor do I care about at any other time. I’ll watch rowing, trampoline, all kinds of stuff I wouldn’t stop the clicker for on any other night.

“You know we’re watching very large men in spandex,” one of my friends said with a laugh as we watched the shot-put finals. Yet another sport I usually don’t stop to watch, but in this case with two Americans at the top, we were all very quiet until the cheers that followed the final throw with the gold and silver secured.

There are plenty of people who are purposely not watching the Olympics, mostly for political reasons. I’ve got plenty of political opinions, and if some of the athletes in the Games are using the competition as a political platform, I just don’t watch.

There have been a few of those, but there’s also been plenty of patriotic pride at these Games across all countries. Watching the Aussies celebrate their swimming success or the Jamaicans their prowess on the track always makes me smile.

In 1968, I didn’t ignore the political demonstration of Tommie Smith and John Carlos in Mexico City. I had a chance to tell Smith that when we were part of the same Bob Hayes Hall of Fame induction class. As a 12-year-old in Baltimore growing up among many different races and religions, I told Smith he introduced me to the fact that in places outside of my neighborhood, not everybody was getting a fair shot.

“Then it was worth it,” he said with a laugh. I’m not sure if he laughed because he was kidding me, or he meant it, but it sure made an impression on me.

Seeing Grant Holloway wrap himself in the American Flag after winning Silver in the 110-meter hurdles made me think of what Smith said to me, and how that fits in to today’s narrative.

I laughed at Kevin Hart and his soliloquy about the men’s 4×100 relay and how we “Can’t carry a stick around the track without dropping it. And the US haven’t won this race in twenty years. Why? It’s the damn Jamaicans that’s why!”

It wasn’t funny when the American team finished sixth in their heat, missing the finals. They didn’t drop the baton, but it was a bad exchange that cost them the 2/10ths of a second and a top three finish. Analyst and Olympian Ato Boldon (who does a really nice job at the Games) explained why the Japanese and the Chinese always seem to make the final and the US struggles in that event. He revealed that they pick their four guys for the race, and they practice all year. It’s technical and it shows. The US uses a “best four” philosophy and the four guys in the final might be running together for the first time EVER! Fast or not, that’s a recipe for disaster.

We’ve joked in our family for years that we’ll never know if our kids would have been champion swimmers because 5:30 AM practices weren’t going to be part of our household routine.

Lucky for all of us, it was part of Caleb Dressel and Ryan Murphy’s daily commitment. I’ve watched and covered both of their careers as a reporter since they were kids. I know how proud I felt to watch them both shine in Tokyo so I can only imagine how their families felt.

It was great to see Caleb listed with all the other great Olympians who have dominated the medal count in their sport at one Olympics. And I was glad to see Eric Heiden included in that group. His five individual speed skating gold medals in 1980 at Lake Placid, in my opinion, is the greatest achievement in Olympic history. He won the sprint AND the marathon and broke a world record by more than six seconds. Amazing.

Have you noticed there’s always a lot of crying at the Olympics? Winners cry, losers cry, families, coaches and spectators cry. It chokes me up a bit as well, maybe because as a sports reporter I always think about the amount of work they put in to get to that moment. And to have it all pay off, it’s no wonder people start crying.

It’s probably the only time every four years I watch swimming. It’s impressive how the television technology has changed the viewing experience of that sport. In water cameras, video from a robot alongside the pool and the extensive graphics have added to that television experience. Rowdy Gaines, an Olympian, brings a real-world perspective to the competition. He knows the sport and the athletes but is still a big fan and it shows. And the addition of Michael Phelps to the broadcast was a real plus.

Never a great interview as a competitor, Phelps sitting beside Mike Tirico brought that rare combination of being a fan and being the greatest ever at the same time. He had some insight that wasn’t too technical but gave us a glimpse of all the big, and little things it takes to be at the top of that game.

And do you think Tirico wearing those microphones on his shirt looks goofy and out of place? Here he is on a beautiful, multi-million dollar set, with custom-made clothes and he’s got this giant black dot in the middle of his shirt? Engineers have told me for years that those mics are omni-directional so moving them a few inches over to his lapel won’t affect the quality of the sound and it sure would look a lot better.