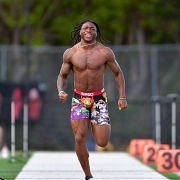 We’ve heard Jaguars Head Coach Urban Meyer talk a lot about how important he thinks “sports performance” is to the success of his new team.

What exactly is “sports performance?”

“There has been a lot of research about different tools to improve sports performance,” Dr. Kaitlyn Buss a doctor of physical therapy here in Jacksonville said this week. “From a scientific standpoint, there’s a lot of research about different techniques and tools trainers, athletes and therapists can use to improve sports performance.”

This week the Jaguars announced plans to build a 125,000 square foot football performance center that will bring state of the art training facilities to the Jaguars organization as part of a comprehensive overhaul of their facilities and the stadium.

Meyer has been vocal and to the point that the Jaguars need to upgrade their facilities and to stay competitive, he’s right. College facilities all over the country, including at Florida and Ohio State where he coached, put most comparable NFL facilities to shame.

“If a player decides to go somewhere else to get better, then I’m going to try to hire that person they’re going to, because they deserve the best,” Meyer said, explaining why he wants this new facility to move the Jaguars forward. “I don’t want to have a player tell me he can get better training in Phoenix. That shouldn’t happen, it should happen right here.”

Jaguars Owner Shad Khan said he wants to make Jacksonville a football destination and to “be the envy of other cities in the US and all over the world.” Although there’s not technically recruiting in the NFL, Meyer knows that showing off shiny new training facilities in Gainesville and Columbus enabled him to attract top talent to those schools. He thinks the same will happen on the professional level here.

Along with the Jaguars new football performance center, Baptist and the Jacksonville Orthopedic Institute are planning on a 42,000 square foot sports medicine complex that will include an elite training facility that anybody will be able to be as part of.

That’s not a new idea, but it is one who’s time is probably now right for North Florida. Dr. Joe Czerkawski, a Sports Medicine/Internist was way ahead of the curve when it came to creating a sports performance facility here in town.

Nearly twenty years ago Czerkawski created the High Intensity Training Center off of Phillip Highway, a place with the latest testing and performance equipment as well as a 25,000 square foot field house with sixty yards of artificial turf for training, batting cages and other “toys” to make athletes better.

“Remember the sand pit,” Joe recalled with a laugh this week, evoking memories of some of the hardest workouts you could go through. “That’s the kind of thing we created that was new. There was a lot of hokey science out there and that’s why I got involved. There were programs that showed improvement with some high intensity training without increase risk of injury. We only hired exercise physiologists. We helped athletes with sports specific training, and it worked.”

To open a sports performance facility like that on your own takes the right people and the right money, which Czerkawski had, but it also takes a steady stream of clients to keep the doors open. The HIT Center had contracts with the police and fire departments and was building group fitness and weight loss programs as a baseline revenue stream.

The key phrase there is ‘people who want to be pushed a little bit.” Working out at a sports performance center isn’t just going a jogging on the treadmill and lifting a few weights. It’s training that will make you better at whatever sport you choose.

“Absolutely you can make a difference,” he explained. The data supports it and my anecdotal experience shows it works. The improvement in foot speed, forty-time, upper body strength. Does it make you a better athlete? Yes. You go into the sports acclimatized better. It’s not just from a power and strength and speed standpoint. It’s neuromuscular training as well. The confidence building, that’s part of it.”

With this kind of sports performance training being a part of professional sports, once pro athletes started taking that level of work into the off-season, some celebrities got involved as well. That’s when the general fitness public wanted to be a part of that.

“Are you training for the Gate River Run or are you getting Trevor Lawrence ready to play in the NFL? Everybody’s getting ready for something,” Matt Serlo, a Master Physical Therapist at PT Solutions in Pone Vedra explained. “It’s just the intensity of level. You need to be in the right hands, so your intensity level is right. You can get specifically trained for whatever competition you’re involved with.”

“Part of it is that parents want their kids to be sport specific, so they’re going to sports performance trainers. That’s why it’s good to have trainers who really understand the body and really understand the mechanics. They can break it down and train you biomechanically for the right sport. Records are being broken left and right because of the kind of training they can now provide. “

Dr. Buss sees patients at the Sports Recovery Annex on Hendricks Avenue and agrees, research and science have made athletes better.

“Bringing the kind of training that pros do to the general public is important,” Buss, a varsity cross country and distance track athlete at FSU, explained. “When you’re training that much, you’re breaking your body down, so you’re taking all of these tools to put them all together to provide care for the athletes so they can perform at their best.”

This kind of ‘elite sports training’ has exploded in the last twenty years. Professional athletes have been gathering in different parts of the country to train together in the off season and it’s become a bit more formalized. Dozens of NFL players have been working out at the Pete Bommartio Performance Center in South Florida each off season.

Jaguars’ Laviska Shenault and Shaq Quarterman are among those who honed their fitness there before the NFL combine. Bommarito’s business has flourished so much in the last two decades, he now has four facilities around the country.

You might recognize Jay Glazer from his work as a ‘NFL Insider’ on Fox Sports. But Glazer was an MMA fighter and enthusiast who started training NFL players with his MMA techniques and now has a whole business of elite sports performance training through his ‘Unbreakable’ gym in Los Angeles.

Jamil Liggin was a track sprinter in college but now is considered a ‘speed specialist’ to over three hundred professional athletes based in California. He started with Marshawn Lynch and Odell Beckham, Jr. and it grew from there.

“When people ask me, ‘How much is a session?” Liggin explained to Men’s Fitness. “I say, ‘I don’t sell training—I give an experience.’ It’s mental training, it’s physical, and we are going to help you reach your goals—whether it be to tone up, lose weight, or get faster, whatever it is.”

And it’s not just about going for a run and lifting weights. Flipping huge tires isn’t going to make you throw a hundred mile an hour fastball.

“There’s a nervous system improvement,” Dr. Czerkawski explained. “It’s not just pushing iron for three months. It’s speed, strength, how your muscle reaction improves. Your body knows how to react to the stressful situations. Your muscle memory improves. It builds that confidence you need to be your best.”