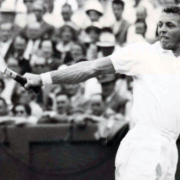 As sports fans we’re all getting used to the different time lines that are happening in 2020. The NBA, NHL, college and pro football have all had jumbled schedules. In golf they played the U.S. Open in September and the Masters is in November.

In tennis they cancelled Wimbledon but the French Open will conclude today, five months after it’s normal spot on the sports calendar.

I called my friend Tony Trabert to talk about what was going on at Roland Garros in Paris this week and he casually mentioned, “I won that seventy years ago.”

Whoa. “Seventy years ago,” I said to myself. “That’s a big number.”

Trabert turned 90 in August and his Hall of Fame career has been well documented: Instrumental in America’s Davis Cup success and eventually the Davis Cup Captain, Trabert won ten Grand Slam titles, back-to-back French Championships and three of the four Majors in 1955. He was on the cover of Sports Illustrated.

But an offer and a little help from a fellow Cincinnatian in 1950 really got things started.

Already an accomplished junior player, Trabert won the Ohio state high school singles championships three straight years, He was at the University of Cincinnati when his idol, Bill Talbert called to offer him a chance to play as his doubles partner in Europe that spring and summer.

“Talbert had taken me under his wing when I was twelve,” Trabert recalled. “He saw me swinging at volleys and came out on the court to help.”

Trabert asked both the president of the University of Cincinnati and his parents about going. The school President said, “You’ll learn more in three months there than you would in three months going over books at school.”

Talbert told the national tennis governing body, then the United State Lawn Tennis Association, he was taking the fledgling star, Trabert, to Europe as his doubles partner and asked for some financial assistance.

“They said no,” Trabert recalled with a laugh. “They didn’t think I was going to be any good.”

Talbert was determined. As one of the top players in the world, he had never played in Europe and told Tony he’d figure it out. So Trabert, Talbert and his wife Nancy traveled through Europe in the spring and summer of 1950 playing in all of the big tournaments as doubles partners.

They flew to Nice and played at Monte Carlo, winning in five sets in the final.

“We played Jaroslav Drobny, a lefthander from Czechoslovakia, and his partner in the final,” Trabert remembered in vivid detail.” He’d kick his serve to my forehand, and I’d never seen that before. I finally figured that out and we won in the fifth set.”

They played in Monte Carlo and won in April. They went on the road and won in Nice, in Rome at the Italian Championships,(where Talbert lost to Drobny in the singles finals) the Paris City Championships, the French, and at Queens Club in London on grass.

The only tournament they didn’t play as doubles partners was at Wimbledon.

Talbert felt that he owed it to his regular doubles partner, Gardnar Mulloy, to play at Wimbledon. Talbert had won the U.S. Championships (now the US Open) with Mulloy four times before 1950. At Wimbledon that year, Talbert and Mulloy lost in the third round. Meanwhile, Trabert and his partner, Budge Patty, the eventual singles champion, made it to the semifinals losing to the eventual champions.

After Wimbledon, they came back to the States and Trabert returned to the University of Cincinnati.

“That was a big jump start,” Trabert said. “By far the most important thing, tennis wise, to happen to me. I saw more silverware in front of me at dinner one night in Europe than we had in our whole house. I learned so much, and not just about tennis. Writing thank you notes, how to dress, all of that.”

“Each tournament gave you something for your travel and per diem,” he added. “When I finally made a little money I told Bill I wanted to repay him. He said just do something nice for another tennis player. Which was typical of Talbert.

Back to the University of Cincinnati in the fall of 1950, Trabert won the NCAA singles championship in ‘51 and played guard on the Bearcat basketball team that played in the NIT at Madison Square Garden that year. The NIT was much bigger than the NCAA’s at the time.

“I had played him four or five times before that,” Trabert said. “He was better than I was, he was ten years older than me. But he was my idol and it was hard for me to want to beat him. I have a picture of us shaking hands after the first time I beat him and he has the most beautiful smile on his face.”

Drafted by the Navy in 1951 during the Korean War, Trabert reported to Bainbridge, Maryland for boot camp that fall.

“They joked I’d be playing tennis with Admirals soon. I got orders to Norfolk next and found myself hanging off the deck of the aircraft carrier Coral Sea, chipping paint off the sides of the ship.”

Looking around for something different as a Seaman Apprentice, Trabert was offered a job as a quartermaster aboard the ship.

“I figured anything was better than what I was doing,” he explained. “I was on the bridge a lot as the ‘Captains Talker’ on air defense.” He was on the carrier for sixteen months, including a six month cruise in the Mediterranean.

The Coral Sea was deployed to “the Med” in the spring of ’52 so there was a chance Trabert could get some leave and possibly play at the French and Wimbledon once again.

“I got liberty and went to play in the French championships. I won a couple of matches but lost to Felicisimo Ampon from the Philippines in the fourth round. He got everything back.”

Another trip to play at Wimbledon the next month on liberty seemed to be in the plans but it wasn’t to be.

“The Navy department sent a message to the captain that it was OK for me to go play at Wimbledon but the captain turned me down,” he explained. “I was on the bridge and the captain said, ‘I guess you’re mad at me.’ He had already made Admiral. ‘I said, ‘No sir,’. Who was I as just a Seaman to be mad at an Admiral? ‘Nothing to do with you,’ he told me. ‘I just wanted to let them know who was in charge of this ship.’”

The next year Trabert was out of the Navy and playing at Wimbledon. The Admiral contacted him to see if he could get him tickets to the tournament.

“I wish I could but I didn’t have any juice. I couldn’t help him.”

Trabert played singles in three of the four Grand Slam tournaments that year, only missing the Australian Championships. During his stint in the Navy he missed nine of the twelve major tournaments he was eligible for, but finished 1953 with a victory at the US Championships (now the US Open) at Forest Hills. In the next two years he won four of the eight majors, was a semi-finalist in two and a quarterfinalist in another.

His 1955 season is considered one of the best ever in tennis history. After a famous, tight ,Davis Cup victory over the Australians in December of 1954, Trabert stayed to play in the Australian Open three weeks later. A loss to eventual champion Ken Rosewall in the semi-finals was one of the few losses he’d have that year.

“We went to Australia to get acclimated in November,” he recalled. “It was fifty hours of flying to get there. Five, ten hour legs. We stopped off in Hawaii for six hours or so to get gas. Vic (Seixas) and I went and played in an exhibition at the Royal Hawaiian hotel, in Honolulu, jumped in the ocean and got back on the plane.”

Trabert went on to win Wimbledon, the French and the US Championships in ’55 among his eighteen tournament victories.

He helped Rene Lacoste develop what became the ‘T2000’ racket and promote the now famous Lacoste “alligator” logo shirts. In Paris for three years to develop professional tennis in Europe, Asia and Africa, Trabert signed Rod Laver to his first professional contract in 1963. He served as president of the International Tennis Hall of Fame and had more than a three decades long career as a television commentator for CBS here in the US and Channel 9 in Australia.

While equipment has changed the game in the last seventy years, Trabert says the top players of any era could compete against each other. The difference is the depth of the draw.

“Now guys have to be ready to play in the first round,” he said. “When I was playing if you didn’t go to sleep it was hard to lose before the quarterfinals. Now you have to be ready on the first Monday. Players are taller and bigger, better servers. Players come from all over these days. It’s about as international a sport as you can get. It’s great for the game.”