A few years ago I was sitting in the Jaguars locker room during training camp next to a veteran player just after a very tough practice. He took his shoulder pads off and let out a long breath.

“We could be in trouble,” he said quietly.

As he looked around the room he said, “It’s a team thing. Some of the rookies just don’t get it.”

Knowing just what he meant I still asked “What’s up?”

“Ramsey’s out on his own. He says he’s not doing rookie stuff,” he explained. “Yan is a hothead and we can’t get through to him. Yet. I don’t know what’s going to happen.”

“So just tape Ramsey to a goal post for a while.,” I said, referring to a time honored tradition dealing with rookies. “He’ll come around.”

“Nooo,” he said. “’Cause as soon as he got loose he’d go directly to Caldwell and then he’d file a complaint with the Players Association.”

“Oh yeah, he won’t even carry shoulder pads and stuff,” he said.”

“And what about Yannick?” I asked.

Anybody around the team at the time knew something was rotten in Denmark.

Talking to Jalen Ramsey in the locker room always left reporters shaking their heads. He was clearly more interested in his “brand” than anything else. Playing football, something he’s very good at, was a means to an end. His recent contract extension puts him in the perfect place for him over the next few years. He’s a phony who happens to be a great athlete. I was amazed he could find his way to his car after practice.

Ramsey, from that 2016 draft, along with Ngakoue and prized free agent Calais Campbell were important parts of the 2017 team that was within eight minutes of going to the Super Bowl.

While most teams would build on that success, for some reason, that team had been dismantled. Four players from that year’s starting twenty-two remain. And three of them are offensive lineman. Only Abry Jones remains from the second best defense in the league just two years ago. That team had five Pro Bowlers and two All-Pros on it.

And it’s not as if most of those guys couldn’t play any longer. Paul Posluszny retired, Barry Church’s career was over and Telvin Smith went off the deep end. Everybody else on defense is still in the league. Ramsey from the first round and Ngakoue from the third were unhappy and are gone. Calais Campbell has been traded to Baltimore.

How did this happen? It happened on purpose.

Like or don’t like what General Manager Dave Caldwell has done to this team, but know that he’s a true believer in what he’s doing.

“Shad gave us a directive to put the best team out there and we feel like we did that with the players that we have,” Caldwell said when the roster was cut to fifty three players. “I love this team. I love the energy this team brings. I love some of the veteran leadership we brought in with Joe Schobert and Tyler Eifert.”

Campbell, Posluszny and Marcedes Lewis were the unquestioned leaders on that 2017 team. They set the tone, they were the veterans who helped create the culture for the success that year.

Under Caldwell, and even before, the Jaguars have a penchant for moving players off the roster who end up elsewhere, when they can still play. Fred Taylor, Mark Brunell and Tony Boselli, all members of the Pride of the Jaguars, ended their careers elsewhere.

Yes, they all were on the downside of their career, Boselli’s was cut short by injury, but name the players who have ended their career with the Jaguars as a simple retirement? Jimmy Smith’s retirement was anything but simple.

Paul Posluszny is one. And he was, and is, sorely missed.

After that run in 2017, Poz retired and Marcedes Lewis was allowed to become a free agent. Lewis is still playing, starting his third year with the Packers.

When Poz and Marcedes left, the culture changed overnight. You could feel it. Campbell tried to hold it together alone. The same thing happened when Jack Del Rio became the Jaguars head coach. From a lot of guys working together as a team, individual stats and performance, and most importantly their “brand” became the focus. There’s a reason Leonard Fournette’s locker was next to Campbell’s.

Keeping Lewis should have been a priority. Was he still the player he was when he came out of UCLA as the Jaguars first round pick? Of course not. Did he still have tremendous value? Absolutely. And the Packers, a perennial contender, are reaping the benefits.

Somewhere in the Jaguars organizational psyche, even back to players like Rashean Mathis, Daryl Smith and Montel Owens, the thought seems to be only about a player’s cost and on-field production. Not much credit is given to what they bring to the locker room, teaching, creating the culture and leading.

These are the kinds of discussions you would hope are happening inside the Jaguars offices. But it seems too often, they are not.

Go back to the beginning of the franchise and look at the pieces added in different years trying to be competitive. Clyde Simmons and John Jurkovic were a presence on the defensive line and in the locker room when they were added right before the 1996 season. That team was very young as well with only four players and two starters, Simmons and center Dave Widell over thirty.

It sure doesn’t seem like the Jaguars have been in the market for those one or two pieces that would keep that “sustainable success” model they keep talking about for the last twenty years.

Were the Jaguars in the hunt for Jadveon Clowney before he signed with Tennessee? When Oakland had their fire sale on Amari Cooper and Khalid Mack, were the Jaguars suitors?

With that as background, here we are on the opening weekend of 2020. The Jaguars are the youngest team in the league. They don’t have a player over thirty. They have sixteen rookies among the 53 man roster. There’s not a Simmons or Jurko in sight.

Their quarterback produced some magic in his first go ‘round in the league. Now that defensive coordinators have seen what he’s good at, they’ll take that away. And he’ll have to figure something else out. The really good ones always do. They’re universally considered the least talented team in the NFL. Nobody’s picked them to win more than four games.

As the architect of the team, you’d expect Caldwell to strike an optimistic tone. And he does have a point when he says nobody actually knows whether the Jaguars are any good or not. They’ll find out quickly today against Indianapolis and next Sunday at Tennessee. Both teams are considered contenders this year.

“We feel like these guys, the guys in this locker room, nobody has seen them play together.” Caldwell said when asked about the team trying to “tank” this year to acquire the 2021 top pick in the draft.

“Don’t count this team out yet and I think they’ll tell you the same thing,” he added. “We can’t afford a rebuilding year and that’s not our mindset. Our mindset is to put the best team out there to play, to compete, and to win. Nobody has seen them play a game so, like I said, we’re going to know where we measure up.”

I don’t dislike Caldwell at all and in fact, I like Doug Marrone, both as a person and as a coach. I’d really like to see him succeed.

“I really think that this team can be special, I really do,” Marrone said this week. “And that’s what I feel, that’s what we put together. I don’t have the opportunity to go through a rebuild, right. I mean, we all know that, so that’s being realistic. We’ve got to go out there and win games and I’m confident that this football team will be able to do that.”

When it comes to pure, raw talent, the Jaguars have that.

And it could pay off in the future.

It just doesn’t seem they’re ready to do that this year. Players who were on the roster just two years ago who allowed the team to occasionally play “above the x’s and o’s” aren’t there any longer. The leaders they do have are still proving themselves.

I hope they prove me wrong. 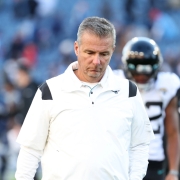