“Man, I have that same shirt,” Mike Love said to me as we were introduced and he pulled on my sleeve. “Really?” I responded. “No really man, I have that exact same shirt,” he offered again. “Well I was hoping you’d wear it tonight,” I told him, ” I was told it was a Beach Boys concert!” Luckily, Love laughed and I felt better about my half smart-aleck remark.

I had gotten an email from Paul Witkowski, the PR director of the Symphony that was pretty simple: “Hey Sam, wanna sing with the Beach Boys?” That sounded intriguing so I replied, “sure.” Paul and I have tried to cook up something with the symphony for a while. I’ve done some things with them in the past and we’re always looking to add to that total, especially a chance to sing.

A couple of days and a couple of emails later I found out the “singing” with the Beach Boys was a little less than I expected. I’d get a chance to sing along on “Barbara Ann,” you know the “Ba ba ba, Barbara Ann” part. Fair enough, I thought. The Beach Boys are an American icon in their own right and their music is a big part of our historical sound track. My personal one too. I think I had an 8-Track of their songs. Anyway, to stand on the stage with them in any form or fashion sounded like one of those experiences you never thought you have a chance to do.

I got there early (stop laughing) and grabbed a seat in the back for the first set. I wanted to see what the set up was in the Theatre. Four guys across the front, a drummer and bassist behind and the Symphony tucked behind them, behind plexiglass. That’s a pretty standard thing in this kind of “cross-media” performance. Voices and guitars could get lost in the full force of violins, trumpets, xylophones and tubas.

The vocals sounded good, perhaps surprising me a little bit. Love is 63-years old and his son stands next to him, singing and playing guitar. Bruce Johnston is the front keyboard player and he’s about the same age as Love. The other guys are fill-ins. Brian Wilson didn’t make this gig. They do make constant jokes about their age, but it is remarkable to think that some of their hits were written and recorded in 1963 yet they’re still timeless, still being performed and have some of the best vocal harmonies ever.

Showing their ability to still sing those harmonies, they borrowed “California Dreamin'” from the Mammas and the Pappas in the first set. Love and Johnston have a running show about each song in the run-up, pretty well choreographed, complete with sounds of creaking bones. Sometimes Johnston’s actions and attempts at audience involvement seem a little forced but it’s all about the fun and the songs anyway. Love does provide some background about the songs, (“Only song written about a car”, or “this song is actually very patriotic. It’s about cheerleaders.”)

At the break I ran into Paul who took me backstage to introduce me to the stage manager so I could help give a car away and understand how I fit into the whole singing with the Beach Boys thing. Problem was, nobody knows what the guys on stage are going to do. That whole laid-back California thing isn’t an act. We were looking for answers when Love happened to walk by so Paul introduced me and asked how it was going to work. After the short exchange, Love, who’s bigger than you’d think and wears about 8 rings, said “Just stand over there off-stage next to Bruce and we’ll figure it out.”

Then he went on to ask if I thought the Omni bar would be showing the UCLA game that night. “My nephew plays for the Bruins you know,” he added. I assured him that it’d be available and we chatted about the team and their chances. Then he drifted off, saying we should listen to the Symphony’s version of “In My Room.” “It’s really pretty,” he added. 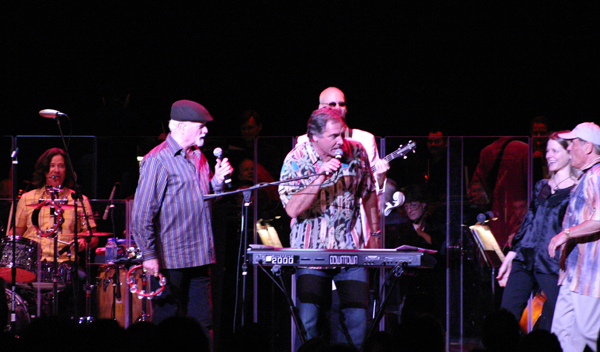 So I hung around, looking at the set list and figured out it’d be about 40 minutes before they got to “Barbara Ann” the third to the last song of the night. I made it over to stage left, right by Johnston’s keyboard, under 10 feet off stage. “Help Me Rhonda” got the crowd going and Barbara Ann was just two away.

Except they skipped the song in between and went right into, “Ba ba ba, Ba Barbara Ann.”

That’s when Johnston walked off stage toward me and I figured this was it. Except he walked past me like I was invisible, circled around the curtain and the plexiglass and headed for a young, blonde violinist in the Symphony. This kind of thing has happened to me before so, although disappointed, I took it in stride.

That’s when I looked up to see Love motioning me on stage and pointing at Johnston’s microphone. I figured I’d take my chance and jumped on stage.

They were at the part in the song right after the “So I thought I’d take a chance on Barbara Ann.” 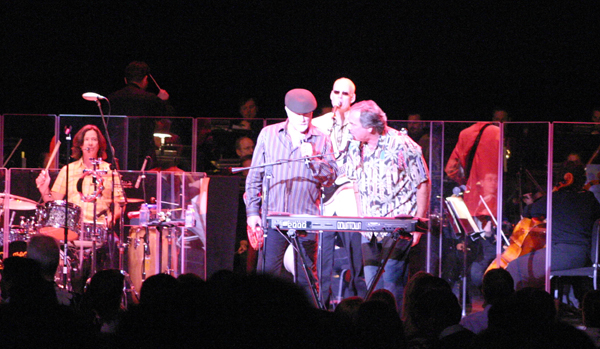 I guess it took Mike Love by surprise and I can’t figure out if he was shocked I was actually doing it or I was singing his part! Either way he was laughing, feigning shock and pointing at me.

In the next verse Johnston showed up with the violinist so I backed off and “exited stage left!”

It was great fun, I think one of those once in a lifetime experiences, I actually could hear myself, got to meet Mike Love and sang in front of the Symphony.

And I guess I have at least one cool shirt.

Back To Augusta
Scroll to top