During my television career, whenever line producers or news directors wanted to steal time from the sportscast for more weather or a story about a cat with cute spots on its face, I’d try to explain why we needed the two and a half minutes they were allotting to cover the sports news of the day.

Rarely would I be successful holding onto the time, but occasionally I’d ask them a simple question: “What other thing are you covering today are people wiling to get in a fistfight about?” A steamy stare, followed by a “Get out of my office” usually followed. But it’s true, people are passionate about sports on so many levels it’s hard to describe to somebody who doesn’t get it.

That’s why the volume of frustration seemed to boil over this week with Jaguars fans, all having an opinion and wanting to tell anybody who was within earshot. My phone has been buzzing a whirring all week with friends asking the same thing: “What’s up with the Jaguars?”

Long ago I learned when fans asked me my opinion about something specific, actually they wanted to tell me what they thought. Which has been fun over the years, especially when their emotions spill over.

I’ve laughed many times when my friend, we’ll call him “Wooly,” has said to me, “I hate it when you don’t get swept up in the emotion of disdain.”

Fans can have that kind of reaction to bad performances or perceived slights by “their” team. Reporters, on the other hand, are supposed to try and give a critical look at things, taking the emotions out and being “professional observers.” We’re given the luxury of going into locker rooms and attending press conferences to see and hear the nuance and tone of what’s said, how questions are asked and whatever mood is pervasive throughout an organization.

I’ve solicited opinions from fans I know about the Jaguars this week and they probably reflect some of your feelings as well. These are season ticket buying, game-attending fans. So they’re into it. I also tried to take emotion out of each situation as it was presented to me. Names have been changed here to protect the innocent.

“The fact could not be clearer that this coach cannot get this team ready for game day,” Wooly said to me after last week’s shellacking by the Chargers. “Right now they’re the worst team in the league. Come on, who’s playing worse?”

That was a refrain I heard often this week as fans threw their hands up in the air and seemed resigned to another rebuilding “How long to we have to go through this ‘Groundhog Day’ scenario?” I was asked.

While Tom Coughlin handpicked Doug Marrone to coach this team, Coughlin also has been responsible for who’s on this roster.

That’s why when Marrone said, “These are our players” in response to a question last Sunday night, my ears perked up. Coughlin used that term in 1995 in a response to a question during the second half of the season seven game losing streak that year. It’s “coach speak” for “We need better guys but they’re not out there walking up and down the street.” Marrone is the first to know that the Jaguars are outmanned due to injury and some personnel decisions that haven’t worked on both sides of the ball in the last couple of years.

“I was sitting at the game going though all of the emotions I could have,” my friend known as the “Ghost of Chuck” said. “How can we get to be this bad? Must be coaching! I said fire everybody but then I said, ‘Wait, I’m tired; I don’t want to start over! “

That’s pretty close to the full spectrum of emotions and solutions I heard this week “You gotta clean house!” was near the top of the list.

Cleaning house for Owner Shad Khan would have to start with the entire management team. Coughlin is the VP of Football Operations and for all of his success early on with the franchise, fans are angry with him right now.

“What makes you think they’re going to draft the right people?” “Ghost” said he tells his friends as his voice rose. “I compare it to other teams, Buffalo, Cleveland, they’ve done that for decades. Most of the franchises aren’t very good at selecting players. We hold ourselves accountable for not taking Russell Wilson or Lamar Jackson or other stars but plenty of other teams passed on them as well.”

“It’s easy to assess from my seat what the symptoms are but I don’t know what the problem is,” long-suffering fan “True Blue” said. “There’s a culture issue with this team. They could adopt the Patriots Way, ruthlessly getting rid of guys who are on the outside of the lines. Look at the Pats, they’re getting the last or the second to last draft pick every year and still winning.”

“Who’s responsible for the culture?” I asked. “Players or coaches”

“My frustration is with the lack of leadership and maturity,” ‘Blue’ added. “Especially on defense. Stupid penalties. They seem to be undisciplined and unmotivated.”

That was a big rallying cry this week among fans, but taking the temperature of the team walking through the locker room and talking to players after last Sunday’s beating, they still are motivated. The locker room isn’t fractured. They’re not faking it.

But the undisciplined accusation is borne out in fact: the Jaguars are the most penalized team in the league. Is that coaching or players just not adhering to basic football fundamentals?

“If they’re going out there, not making mistakes and playing hard, people will put up with that,” Blue added. “It boils down to selfishness; It turns me off. I don’t have any interest in taking three and a half hours out of my Sunday and support that. It’s great to have a hometown team but it’s been a tough run.”

My friend “Big Beef” is a suite holder and says he’ll continue to buy in every year. But for the first time ever he and his guests left in the third quarter of last week’s game.

“I was so disappointed,’ he said. “The fans deserve better.
I come back from out of town to go to the games but at some point they’ve got to repay the people for their loyalty. These last three games are inexcusable.”

“Beef” has clearly been successful in his business life managing people and making big decisions. He wonders why the Jaguars brass can’t seem to get the best out of some top players who flourish elsewhere.

“I don’t know enough about football to know what’s wrong but there’s something the matter with that team,” Beef added. “I was thinking when I left Sunday that ‘Thank God I don’t have enough money to own a football team because I’d be irate.’”

Because of all the losing, some fans’ interest has faded. With one game left at home over the holidays between Christmas and New Years, the Jaguars brass already knew it would be a tough sell for fans unless the game against the Colts meant something in the AFC South or the playoffs. It doesn’t. But these four fans are planning to be there.

“Look how great it is to have a team in town, so don’t be apathetic. It gives us a sense of community. It’s an entertainment piece that the city needs to have and embrace. People here embraced the players like they do in Buffalo and Cleveland. The players like living here. It’s an important part of who we are.” 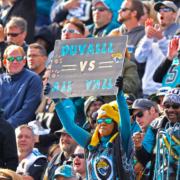 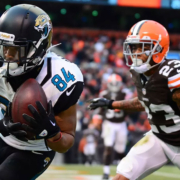 Bortles to Minshew and In Between. What Happened