They have too many talented players, eight on defense who have an appearance in the Pro Bowl, to have lost four straight and have a 3-5 record halfway through the season.

“Where is this team that we have had that everyone believes in?” Head Coach Doug Marrone asked this week. “Now, all of a sudden it is four straight losses.” 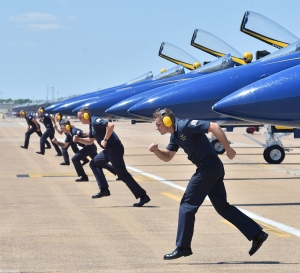 Last weekend the Navy’s Blue Angels were in town. Talk to anybody who’s ever been in the “Blues” they always refer to it as the “team.” Members of the Blue Angels squadron come out of the Navy and Marine Corps fleet of combat jet pilots. And when their two year stint as part of the demonstration team is over, they go right back to a fleet squadron. They know something about building a team and sustaining the excellence necessary to perform at the highest level. They’re motivation is two-fold: staying alive and making the team look good.

“It’s all about the mission,” said Orange Park native Captain Dave Koss, a former Commanding Officer of the Blues and most recently Commander, Strike Fighter Wing Pacific.
“The mission of a football team is to win. Coincidentally this year the Chief of Naval Operations said, ’This is the year we win.’”

How do you get things back to “winning ways” when a team starts to unravel? Whether it’s an NFL team, the Blue Angels, the method is the same: Frank self-assessment and get back to work.

“You are going to self-scout and see what you are doing and what you have to do a better job of and what’s working and what’s not working,” Marrone said of the process over the bye week. “I think you have to have a common goal and message. You have to establish an identity for what you want to do and right now; we haven’t done that in either phase.”

“The debrief is frank,” Miller said of a squadron’s version of looking at game video. “We want to help each other. We look at guys and make sure they’re still trying. If they’re not, you have to get them out of the squadron because they’re going to hurt themselves and somebody else.”

You could say the Jaguars did that this week, dealing Dante Fowler to the Rams. Described often as a “man-child,” Fowler is clearly a good football player. He just wasn’t a good teammate.

Marrone agrees that a frank look in the mirror is where he, and everybody should start.

“I think you have to take a good look at yourself as a head coach and say, ‘Hey, are they listening? Is my message being heard?

“Clear buy-in to what the goal is,” added Koss. “If your heart’s not in it, you’ve got to go. In the Blues it’s about focus and focusing on the right things. If something is distracting from the mission, things can go poorly. Fast.”

When a football team is struggling, the season is a stake. When a squadron is struggling, lives are at stake. But the same procedure goes into place to change what they’re doing.

Rainey says a struggling team needs to find a common bond and get closer, “It’s commitment to the larger organization,” he noted. “Trying everyday to try make it better. You’re going to have bad days, but both privately and publicly you have to strive to be better and be selfless about the team.”

Any leader, football coach or squadron commander could easily make the following statement:

This just happened to be Marrone explaining how he sees his role in reversing the Jaguars current decline.

“There is a story out there about this team,” Marrone told the Jaguars players this week. “It is an ugly story. But the story hasn’t ended. We can still control how this story reads.“

Every debrief of the Blue Angels ends with each team member saying “Glad to be here,” acknowledging the privilege it is to wear the uniform. It’s something the Jaguars could adopt.

For the Jaguars, a playoff spot is at risk. For the Blue Angels or a front-line combat squadron, lives are at risk.

Clearly, both have to get it right.

Episode 21 – Can the Season Be Saved?

Episode 22 – Jaguars must work in their craft
Scroll to top