There was that moment when NFL Commissioner Roger Goodell said, “With the first pick of the 2021 NFL Draft, the Jacksonville Jaguars select Trevor Lawrence, quarterback, Clemson,” when it felt surreal.

After the disappointment and drudgery of last year, and for most of the last decade, the whole mood swung 180 degrees in the other direction. The worst record in the league gave the Jaguars the biggest reward: the first pick in the draft. And not just any first pick. A generational player of whom Jaguars General Manager Trent Baalke says, “There are no negatives.”

Lawrence, in every instance in front of the media since becoming the number one pick, has said things and done things that make you believe he is the kind of player, and person who can reshape a franchise.

“I think it’s just important to be normal,” he said when asked about becoming part of the community. “One way to do that is plugging into the community, investing in the community and caring about the people around you,”

That’s not the typical answer from as twenty-one-year-old, no matter how much coaching and experience he’s had in the limelight.

And on his football expectations? Can he quickly adapt the NFL and be a starter week one?

“I expect to perform well and to adjust quickly and be ready to go, and that’s something I expect a lot out of myself. it’s just about earning – I think the biggest thing is – the respect and trust of your teammates,” Lawrence said without hesitation.

“Without that it doesn’t really matter what you expect going in, you’ve got to earn that first. I’m just going to take it step by step, but like I said I’m going to do everything in my power to prepare, to be the best I can be and put us in the best chance to win.”

From there, the Jaguas settled into reshaping their team. Jaguars Head Coach Urban Meyer said, “We have to get this right,” and agreed that at a minimum, their top four picks have to be impact players right away. Starters who make a difference.

Making Travis Etienne, Lawrence’s teammate at Clemson their second pick of the first round gives the Jaguars a look in the backfield they haven’t had in a while. They addressed some of their coverage issues taking Georgia cornerback Tyson Campbell with their first pick of the second round. And their fourth pick was a bit of a head scratcher, considering Meyer’s praise of the current players on the offensive line over the last four months.

“Our offensive line is pretty good. It’s not a blow-up offensive line,” Meyer said at Lawrence’s pro day. “You know, we got some other areas we got to fix. There’s some good pieces there but we’re gonna make it even better.”

The Jaguars went so far as to put the franchise tag on left tackle Cam Robinson, giving him a ten-fold raise in the process.

But with the fourth pick, an ‘impact’ player according to Meyer, they took Stanford offensive lineman Walker Little, who is anything but. At 6’7” 333 lbs., Little didn’t play in 2020. He said the Jaguars have talked to him about both left and right tackle but admitted “I’m just an offensive lineman prospect for them.”

He’ll compete for a backup spot on the offensive line with the thought he’ll eventually be a starter.

Little and their first pick in the third round, defensive back Andre Cisco, haven’t played football at all in the last year because of injury. That’s been part of Trent Baalke’s history as a General Manager.

Now the reality sets in. Projections mean nothing. Forty speed, vertical jump, bench press, none of those mean a thing. You might be looking for athletes on paper, but on the field, you’re looking for football players.

It reminds me of one of my favorite scenes from a movie in the early ‘70’s “The Candidate.” Robert Redford plays an idealistic, first time politician who is put up for election as fodder against an incumbent. It’s a great foreshadowing of what political campaigning has become in the television, media age. (“Wag The Dog’” is another.) The catch is, he’s supposed to lose. On Election Day candidate Redford pulls out a surprising victory. At the post-election celebration, he spots his campaign manager across the room and mouths “Now what?”

And that’s the question for the Jaguars: Now what?

Things like this never happen to this franchise. It started with them losing a coin toss to Carolina to get the first pick of their first draft in 1995. They’d have taken Tony Boselli no matter, but good fortune has never smiled on the franchise. They’ve always been one player, one play or one draft pick away from what they really want to be.

And save for a one-off year in 2017, they’ve been irrelevant for over a decade.

The selection of Lawrence instantly puts the national spotlight on the Jaguars. But it’s the rest of the team makeover that will determine what they do on the field. They have their quarterback; they spent some money restocking in free agency and looked to the not-too-distant future with their draft picks.

Every NFL team has a forty percent turnover each year. That means twenty of the fifty-three players on the game day roster will be different.

For the Jaguars, that number will be much higher.

“Jacksonville will be the most different looking team in the NFL,” long time NFL writer Peter King said before the draft. “Not just because they’re taking Trevor Lawrence, but they have a new coach who wants to impact every part of the team. Who are they keeping? At linebacker, they’ll say, ‘Myles Jack, you’re staying. Everybody else we’ll see when the season starts.”

That seems to be what the coaching staff is bringing across the board: competition at every position.

Will they be better? Las Vegas has put the over/under win total at six. That’s a whole lot better than one for sure, but you have to think with all of the changes they’ve made, they’re betting the over right away. Meyer nearly scoffed at the idea of a “rebuild plan” when asked about what kind of patience he thinks he’ll have with a new team.

“Well, the way I’ve always looked at everything is—at the moment whoever gives us the best chance to win is going to be playing,” he said. “And that’s every position at that moment who gives us the best chance to win and that there is an incredible amount of urgency. I told our players that, all due respect, the four-, five-, six-year plans, that’s not that plan at all. The plan is to try to do the very best to win. Every time we line up, we try to win.”

With the draft over it seems like an inordinate amount of work to add under a dozen unproven players. But all of that research doesn’t go to waste.

“Sometimes people say we made all those reports, and we only took a few players,” one personnel director noted. “My response always is, ‘We just made the first report for our pro personnel department on the other guys. They go right to that database, so you have it in September when they get cut or two Septembers from now.’

When they tell players every move they make on or off the field around an NFL team counts, they mean it. They’re not just auditioning for one team but for all thirty-two at the same time. And not just for today. That information is stored and leaned on for years to come.

That’s why Nick Saban’s “And Or But,” description is so accurate.

“I tell players they can help themselves in a lot of ways,” the current Alabama and former NFL Head Coach said this week. “When a team puts together a report on a player on height, weight, speed, hands, whatever, there can be an ‘and’ that includes ‘he’s a good teammate, great character. Or there can be a ‘but’ ‘he had a fight in the locker room, has a drug charge.’ Do you want to be an ‘and’ or a ‘but?”’

There’s one more situation where the scouts stick with the current class before moving on to next year. They’ll start looking at 2022 in earnest around Memorial Day but when this 2021 class takes the field, they have a rooting interest.

For the Jaguars, that’s scheduled for May 17th when the rookies will be on the field together for the first time in their own rookie mini-camp.
“You just don’t want to go out at rookie camp and see a guy you really fought for struggle,” one scout explained. “You want him to get off to a good start,”

After a lot of ‘no fun’ years following the Jaguars, don’t we all. 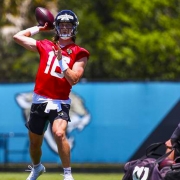