In the five years the Jaguars have played in London, they’ve tried all kinds of different things to figure out how to give themselves the best chance to win.

One year the team left directly after a game from Cincinnati. Dinner at the Montgomery Inn on the river, then a special TSA check, bus by bus, in a warehouse at the airport followed by a non-stop flight to London. They arrived on Monday morning, practiced all week with a regular routine and played the game on Sunday evening.

And the Jaguars got blown out. 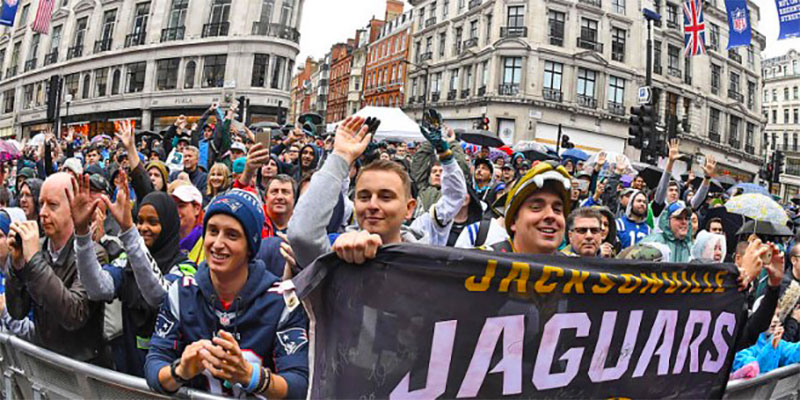 So they tried something different, leaving on a Monday night, arriving Tuesday, practicing all week at a resort called “The Grove” (they played a World Golf Championship there. Tiger won.) With a regular practice routine on a purpose-built American Football field they had a routine practice week and played the game on Sunday evening.

And the Jaguars got blown out.

The following year they shortened the trip hoping for a different result. They left on a Thursday night, arriving on Friday morning. They practiced at noon at the Saracens grounds (a rugby team in London), stayed right next to Wembley Stadium at the Hilton and played the game on Sunday afternoon.

So the next season they followed the exact same routine, to the minute, and beat Indy, 30-27. And the following year they did the same, blowing out the Ravens 44-7. 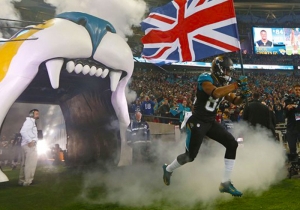 They seemed to have found their groove when it comes to playing in London.

Unlike traveling during the regular season in the States where the Jaguars have to charter their own plane, (Atlas Air 747 the last two years) the NFL has a deal with Virgin Atlantic for these London games. They fly the Airbus A340-600, one of the longest civilian aircraft made. It has 68 rows, three cabins and 48 first class seats. That’s one of the keys to chartering that particular plane. The players get the lie-flat seats up front.

That’s no guarantee regarding what might happen Sunday/today. Both teams are struggling at 3-4 and coming off losses. The Jaguars started the week as a 3-point underdog, so the odds makers don’t think much of the Jaguars streak nor their London routine. Their recent woes are helping set the line rather than the extraneous factors regarding travel overseas.

While the football team has settled into a routine, so has the front office side of the club. Between soliciting potential sponsors and entertaining clients, their plates are full. We’ve heard that the revenue generated in London enhances the Jaguars position in Jacksonville and that’s true. Business relationships developed through Shad Khan’s commitment to playing a game in London every year now account for reportedly nearly 20% of the Jaguars yearly revenue.

Their UK fan club has grown exponentially each year. The number of Jaguar jerseys in the stands has multiplied. While the game is still a celebration of American football for fans in Great Britain and all over Europe, there’s no question the Jaguars commitment to playing at Wembley every year has turned many of the general NFL fans overseas into Jaguars fans. Jaguars merchandise sales there are way up.

For Jaguars sponsors, this is the ultimate road trip invitation. Every sponsor gets invited at some point during the season to travel on the team plane to an away game. The game at Wembley includes the charter flight there for some, a stay at a luxury hotel, sightseeing in London and a few parties. Party venues have included the Tower of London (the whole thing), Kensington Palace and the Beatles’ Apple Recording Studio. Shad is really good at throwing parties.

Buying an NFL team has been part of Khan’s business strategy for over a decade. He was hours from buying the St. Louis Rams before Stan Kronke exercised his option. Shad bought the Jaguars shortly after that, having already been vetted by the league as a potential owner. 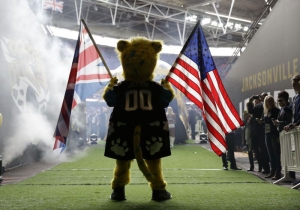 He had a plan in his head for whatever NFL franchise he eventually owned, in part to be his entertainment center in the US for his North and South American clients. It’s why he quickly expanded and updated the owners box in Jacksonville and wants to make games part of a whole weekend of entertainment including concerts at Daily’s Place. Clients come in from all over as Shad’s guests at home Jaguars games. He does the same on the road.

Entertaining clients in London at the Jaguars game at Wembley is an extension of that philosophy. It’s the same at Craven Cottage, home of his soccer club, Fulham, in west London. He’s petitioned and won the right from the City of London to build a new Riverside Stand at Craven Cottage, cantilevered thirty feet over the Thames. He’ll expand his entertainment facilities there as well to easily accommodate his UK and European clients.

Making an offer for Wembley Stadium was another piece for Khan, with businesses worldwide; to create a revenue stream that includes the Jaguars. It wasn’t a precursor to moving the team, rather another part of the Khan Empire.

Episode 21 – Can the Season Be Saved?
Scroll to top