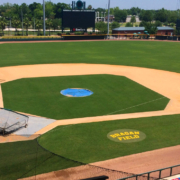 For nearly a hundred years, Major League Baseball had an agreement with numerous minor leagues to operate as a farm system to evaluate and develop talent. The National Association of Professional Baseball Leagues represented the minor leagues and franchises but when their agreement with MLB ran out on September 1st, the whole system changed.

Once the reorganization started, Major League Baseball told team to do what they wanted with their farm clubs. Dominos began to fall, and Jacksonville was positioned, literally on the map, to benefit by upgrading to Triple A baseball.

Since there was no minor league baseball in 2020 and only a sixty-game major league season, MLB teams created what they called an “alternate site” where they stored thirty players who continued to train, play and be ready to be called up to the big leagues.

The Minnesota Twins put their alternate site in St. Paul, using the Independent League’s St. Paul Saints facility. It made it very convenient to bring players up from just across town. It worked so well, the Twins decided they’d put their Triple A in St. Paul and with no agreement with a minor league organization, other clubs followed suit.

Since Jacksonville has a geographic proximity to Miami, the Marlins decided it would be more convenient to have their AAA team in Jacksonville instead of Wichita.

Actually, the Wichita affiliate never played a game. After being promised a Triple A franchise (moving from New Orleans) for building a $73M ballpark, the Marlins decided Jacksonville was closer so no Wichita Wind Surge for the Marlins. Instead, the Wind Surge will be the Double A affiliate of the Twins. And for now, New Orleans has no baseball. Fresno and San Antonio also lost their Triple A franchises.

In all, Major League Baseball is eliminating forty-two teams, streamlining each of the big league’s minor league system to just four teams: Triple A, Double A, hi A and low A.

“Getting rid of forty-two teams puts over a thousand players and coaches out of work,” said former Major League catcher Rick Wilkins. “I don’t think that’s such a great thing.”

MLB has encouraged the forty-two teams to create their own independent leagues, in essence “farming out” their farm system to develop talent without paying for it. So perhaps those jobs won’t be lost.

Our Triple A franchise history started in the early ‘60’s. The Havana Sugar Kings had relocated to New Jersey from Cuba when Fidel Castro nationalized all US interests there. They were bought by a Jacksonville group headed by Sam Wolfson. He had brought baseball back to town with the Single A Jacksonville Jets and in 1962 he brought the Sugar Kings here and they became the Triple A Jacksonville Suns.

The Suns were affiliated with the Cleveland Indians, the St. Louis Cardinals and the Houston Colt .45’s before becoming the Mets affiliate from 1966-1968. They won the International League Championship in 1968. Players like Luis Tiant, Tom Seaver, Tommy John, Nolan Ryan and Tug McGraw all wore the Suns uniform.
Why did we lose Triple A then?
When the Braves moved to Atlanta in 1966, the minor league team, the “Crackers” went to Richmond. Jacksonville was left on an island without a “Southern Swing” partner and the Triple A affiliate here moved to Norfolk in 1969.
And now, fortuitously, we have AAA back, if they start playing minor league baseball in 2021.
“It’ll be great for Jacksonville, it’s great for the perception of the city and the baseball,” Bragan said. “The first few years we were here a lot of our older fans would say, ‘I wish you’d get Triple A back. It was much better baseball.’ It’s a big deal and should translate into more tickets sold and corporate sponsorship.”

“Double A is considered upper-level baseball but with every step the players get incrementally better,” Wilkins explained. “They’re a lot of good baseball players in Triple A. The pitching gets deeper, the lineups are deeper and better. You have some guys who are outs at the end of the lineup in Double A but in Triple A everybody can hit.”

“If you’re playing every day as an established player in Triple A, somebody gets hurt in front of you, you’re going to ‘The Show.’”

Wilkins was on the ‘fast track’ when he signed with the Cubs, playing a year in A ball, Winter Ball in Venezuela, and a year in Double A in Charlotte. He started 1991 in the Cubs ‘big league’ Spring Training camp in Mesa, Arizona. With about a week left in spring training, he was assigned to the Minor League Complex down the street and the Triple A Des Moines Cubs.

“I was a little disappointed, you never know what’s going to happen. You’re getting opportunities to open some eyes in the big-league camp. I felt so good about where I was as a player and mentally, I knew I was ready to play in the big leagues that year and needed to wait on my opportunity.”

After about six months in Des Moines, Wilkins got ‘called up’ on his 24th birthday, June 4th.

While Wilkins spent eleven years in the Majors, he also spent part of eight of those seasons in Triple A at the beginning and the end of his career and on injury rehab assignments. He knows the culture at that level.

“It’s different in Triple A in the clubhouse,” he explained. “Above 24 or 25 years old in Double A you’re wondering what those guys are doing there. In Triple A it’s very serious. There will be guys in their mid 30’s in Triple A and it’s their livelihood. They’re trying to clean something up and get back to the big leagues. There’s no projects in Triple A. It becomes more of a narrow focus.”

In Triple A there are two kinds of players: Young guys trying to break into the big leagues and veterans trying to get back there. It makes for an interesting dynamic in the clubhouse.

“Everybody kind of has an idea about what’s going on,” Wilkins remembered. “Guys are talking about ‘how’s this guy not in the big leagues right now’ because you’re right there. That old saying is true: It’s hard to get to the big leagues and it’s harder to stay there because there are a million guys vying for you spot. It’s every day.”

“It’s like the big-league club’s spare parts bin,” is how Bragan says Triple A has changed. “Your next starters, you hope, are mostly in Double A. In Triple A there are guys who are there “just in case.”

Wilkins agreed that the ‘finishing school’ aspect of Triple A seems to be gone.

“Different clubs have different plans,” he explained. “The Cubs wanted everybody to have a year at every level. The Cardinals wanted everybody out of Double A by the time you were 21-years old. Now they’re rushing a lot of guys to the big leagues and finishing their development up there.”

In the last three years of his career, Wilkins spent about 40% of his time in Triple A and occasionally got the feeling he was one of those ‘spare parts.’

He spent most of the ’99 season with the Dodgers Triple A in Albuquerque when he was 32 years old, had what he called “a pretty good year” but also a revelation.

“I didn’t get called up in September,” he said. “I thought some politics were involved. When you’re in your 30’s and you’re in Triple A you start thinking, ‘how long do I want to stay here.’”

“It’s frustrating for guys who have been established major league players who aren’t getting a chance to show what they can do. You know the front office is saying ‘We know he’s an established big-league player, he can hit and throw and call a game. But we’re going to look at this (younger) guy.”

Finishing his career with San Diego, Wilkins got two hits in his final game, including one in his last at bat of the year. Rickey Henderson got his 3000th hit that day and it was Tony Gwynn’s last appearance in the Major Leagues.

“That’s a fun memory,” he said with a laugh.

And with Triple A coming to Jacksonville?

“People will see a lot of good players come through here,” he added. “It’s serious, it’s a callup away, an injury away, they’re trying to break through.”