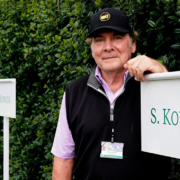 Adam Schupak – GolfWeek
AUGUSTA, Ga. – The wait is over for Sam Kouvaris to be honored at the Masters. 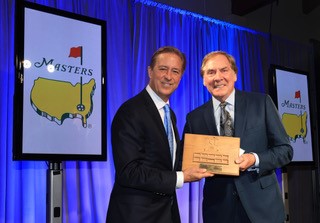 In early 2020, Kouvaris received a letter in the mail from Augusta National Golf Club Chairman Fred Ridley congratulating him on his upcoming coverage of his 40th Masters and notifying him that he would be honored with the Masters Major Achievement Award in April. But then the global pandemic postponed the Masters until November and canceled the Golf Writers Association of America Annual Awards Dinner, where the award is traditionally presented, for not one but two years.

On Wednesday evening at the Savannah Rapids Pavilion, Kouvaris, 66, was one of five honored with a plaque for reaching this milestone achieved by just 31 members of the press corps.

“Your vivid descriptions, accurate reporting and heartfelt love of golf and the individuals who play the game will serve as an inspiration for all time. These accounts from Augusta National have helped make the Masters one of the great sporting traditions in the world,” are the words inscribed on a permanent plaque in the Masters media center with a roll call of this exclusive club.

Kouvaris also received his own parking spot in the press lot at Augusta National.

“A friend of mine texted me a picture of my sign on Sunday and told me I’m in the front row,” he said.

Kouvaris covered his first Masters in 1979 at age 23 when he was working for Channel 2 in Charleston, South Carolina, and his credential followed him to Jacksonville when he joined WJXT-Channel 4. He missed the tournament once in 1982, but for good reason – his oldest daughter was born during the final round. Instead, Kouvaris watched the broadcast on a small black-and-white TV in the hospital. He covered his 40th Masters in 2020 for the Florida Times Union.

“The first one was pretty special,” Kouvaris said of seeing first-time participant Fuzzy Zoeller win in a playoff. “I was standing behind the green at 18 when Jack Nicklaus won in 1986. One year I was standing with a friend at 13 and he asked me, ‘Where should I propose to my fiancée?’ I said, ‘Right here.’ He brought her over and dropped to one knee and proposed to her right there. It turned out to be David Duval’s sister.” 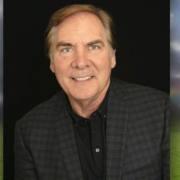 We’ve been at this a while, you and me. About forty years actually. Mostly we’ve talked about sports, but you even embraced me when they asked me to anchor the news on television for a few years. Some of you laughed, and even said you were inspired when I used to do those silly pep talks on the radio.

They cancelled The Players. Nobody liked that. I’m not a fan-boy for the PGA Tour Commissioner Jay Monahan but he did the right things at the right time this week. Anybody critical of the decisions Monahan made isn’t paying attention. He made the calls about what to do in real time, and at each step did the right thing.

Monahan was talking about golf, but he was spot on about all sports when he said games “unify and inspire us.”

That doesn’t mean I like any of it. Or that I haven’t missed it.

I’ve missed seeing Rory play the weekend and try to defend his title. Like a lot of you, I like it when Rory plays well. He’s authentic, honest and without pretense when it comes to being a superstar on the world stage. He also has the swing I’d love to have, just once.

But mostly I’ve missed talking to Ferdinand, one of the security guards near the clubhouse. I only see him a few times a year, sometimes at Jaguars games, but every year at The Players. We don’t talk about much, but each time I see him, it brightens my day.

I’ve missed the small talk with the guys who volunteer behind the reception desk at the media center. I never see them outside of this week, but It’s a nice feeling to walk in there, talk about the long hours, who’s playing well, the weather, whatever comes to mind.

I’ve missed talking with John the ticket taker and Bekka, the bartender at the Greenside Lounge. Neither is from here, but they make the trip to North Florida every year to work The Players from points west and north. Neither will make the money they were counting on this week before they headed home. But both promised they’d be back next year.

And I’ve missed the time I usually spend with the former Chairmen of The Players, Buster Browning, Mike Hartley, Anne Nimnicht, Lynn Stoner and others. Just hanging out, talking about past Players and the tournament’s bright future. And I’ve missed the chats I have every year with the volunteers around the back of the 9th green.

So I’m sure you’ve missed some of the same things. The cocktails you’ve had with the same friends overlooking 17 year after year. Watching players trying to make birdie on number two, marveling at their short game. Or watching them bomb it off the 16th tee knowing an eagle could be waiting ahead.

And you know what? That’ll all come back. That’ll be there next year, and we’ll look back and marvel at how we came together and got through this tough time.

Because that’s what we do.

Not just as sports fans but as American’s and especially as people who live here in North Florida and South Georgia. We’re used to being picked on, overcoming adversity and getting things done. It’s nothing new to us.

We lean on our families, our friends and each other to get through things. I’ve seen it time and time again in our time together. Sometimes it’s when bad weather hits, other times its when we’re counted out of some competition, only to surprise everybody else.

So this is no different. The coronavirus will, we’re told, get worse before it gets better. But it will get better. We have the best minds in the world working on a solution. Politics shouldn’t have a role in this and we already know one thing: The person sitting at your kitchen table has a lot more to do with how you’re doing than some politician sitting behind a desk in Washington.

There won’t be any sports on television or live in arenas we can attend for a month, maybe longer. That’s inconvenient, and also a little weird. No March Madness? No Masters to signal the beginning of spring? No Spring Training games? It won’t be snowing anywhere on Opening Day if they start the baseball season in late April!

But all of that will be ok. We’ve got a bigger purpose that we’re working on right now. Sports have always been part of the fabric of our lives, but they don’t define us. You spend your money on cable or streaming to watch your favorite teams. Or you plunk down plenty of cash to cheer your club in person. You choose to do those things. You don’t have to do those things. You, hopefully for the short term, have more important things to do.

Like taking care of yourself and your family. Helping your neighbors. Washing your hands and doing all of the other recommended things to keep the coronavirus at bay.

I like what Tom Hanks said from quarantine with his wife in Australia after contracting the virus:

“Remember, despite all the current events, there is no crying in baseball.”

So there’s not a game on the TV in the background while you’re eating dinner? Use that time to talk with your spouse and your kids. Get closer to them. Go for a walk. I’d say go to a park but Mayor Lenny Curry closed all of the public parks. He didn’t think that one through. We know to practice “social distancing.” We can go to a park without being on top of one another.

Practice your guitar. Help your kids with a project they’re working on. Fix that fence in the backyard you’ve been avoiding. Or my favorite: Go out and play some catch.

Maybe say a prayer for safety and gratitude.

Be smart. Follow the best practices for staying healthy. Hug your family.

Perhaps the highest compliment I’ve ever gotten was at the summit of a grueling climb on my bicycle in Europe. One of the wives of my fellow cyclists, she reminded me several times she was German, was there at the top when I arrived, last in the group.

“I told them you’d finish,” she said. “I told them ‘He’s an American. American’s finish.”

And she was right. We’ll finish this. Together.