I’ve been pretty fortunate in my journalism career to do some exciting things and meet some interesting people. I’ve often said that I had the second best job in the world, Pat Summerall and now Jim Nantz topping that list. And you might have heard me say more than once, “I’ve flown with the Blue Angels and the Thunderbirds. I’ve had breakfast with Ali, lunch with Richard Petty and beers with Arnold Palmer. Tony Trabert is one of my best friends. What’s not to like?”

Add to that list now, I’ve fished in Lake Lloyd.

If you’re not a NASCAR fan, you’ve never heard of Lake Lloyd and have no idea where it is. Because Lake Lloyd sits in the middle of Daytona International Speedway.

When Bill France, Sr. was building the Speedway in the late ‘50’s, they dug down in the middle of the racetrack to grab enough dirt to build the 31-degree banking in the turns. When the track was finished in 1959, France named the lake after a local car dealer in Daytona who had given him his first job as a mechanic in the 1930’s.

At 44-acres, the lake was a little close to the edge of the track and a few times cars did end up in the lake so it was trimmed down to it’s current 29-acre size. Early NASCR Driver “Tiger” Tom Pistone was so fearful about driving into Lake Lloyd. he’d keep scuba gear in his car. Just in case. 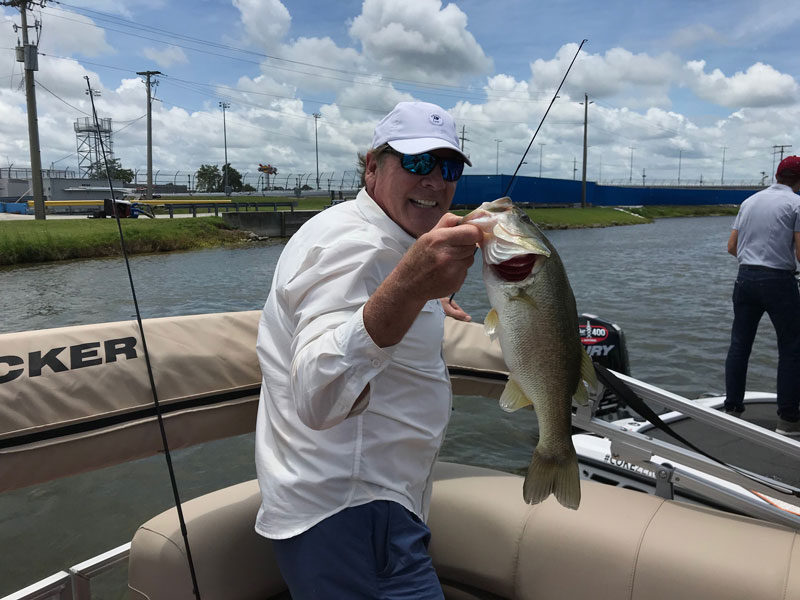 France also had the Florida Fish and Wildlife Commission come in and stock the lake with bass. And it rarely gets fished.

So when the invitation came from NASCAR to fish in Lake Lloyd with 2011 Coke Zero Sugar champion David Ragan, I immediately said yes.

I’ve bass fished for about 35 years and since my friend and former Georgia and NFL quarterback Matt Robinson taught me how to bass fish, I thought it was only fitting that I invited him to go along. Matt was there to get some pictures of me fishing with Ragan and if the chance came, throw a line in Lake Lloyd.

Ragan lists his hometown as Unadilla, Georgia, just south of Macon along I-75. “Being from a small town, I’ve had a chance to fish in some ponds,” Ragan said before jumping onto the bass boat waiting at the dock. He fished with Daytona President Chip Wile and looked right at home with a pole in his hands. The media was aboard two pontoon boats waiting our turn to join them.

Actually during the NASCAR races, any fan in the infield can fish from the dock at the lake. And there’s a charity fishing tournament held there before the Daytona 500. But a chance to get into a boat and fish some of the nooks and crannies, some of the structure and the drainpipes was something special.

Smartly, the folks from Bass Pro Shops who supplied the boats and the fishing equipment put an extra couple of poles in the media boats.

Before you knew it, Wile had caught three good-sized fish along the southwest corner of the lake. Ragan pulled two to the boat on successive casts. It was pretty windy but the tackle provided was able to handle that.

While we were maneuvering to get more pictures of Ragan and Wile fishing, Robinson, in the photographers boat, and me, in the reporters boat, rigged up some green worms and got lines in the water.

If you’ve ever fished with friends, you know those dual, simultaneous feelings that come over you when they hook the first fish. You’re thrilled for them, and at the same time more determined than ever to have something happen on the end of you line.

That’s how I felt when I looked up to see Matt standing on the side of the boat with his line bent in half reeling a bass to the boat. No sooner had he held it up to show me when I felt that familiar “tap-tap” in my hands. I set the hook hard but the line didn’t move so I figured I was snagged on the bottom.

That’s when the drag started signing with the line going in the opposite direction. A few minutes later, I brought what turned out to be a 4-6 lb. bass to the boat. He was big enough that I couldn’t get him out of the water with just the line and the pole.

I was feeling pretty good when I showed him to the guide on our boat who said, “You could throw a sledgehammer in here and catch a fish,” to a big laugh.

Ragan was clearly enjoying himself when I jumped aboard his boat. He had reeled in a few fish and helped a couple of novice reporters catch their first ever in the process.

After this season, NASCAR will move the second race at Daytona to the end of the year, the final qualifying race before the playoffs. Ragan was nostalgic about racing this Saturday at Daytona for the final time during the 4th of July holiday weekend.

“I love coming here,” he said. “When I was a kid, I knew we were going to sit around the house and watch the Firecracker 400 (now the Coke Zero Sugar 400). It was something we knew we were going to do. My dad (Ken Ragan) got to race here. I was fortunate to win here. It’s really special to me and my family.”

Ragan’s father is involved in his career and according to David, sometimes just shakes his head at how technology has changed the sport.

“He shakes his head a lot,” Ragan said with a laugh. “We have a group of engineers using simulation two weeks ahead of the race to prepare. We know the car, the engine. We’ve scanned the racetrack for the different bumps, the width, everything about it.”

“We know when we hit the racetrack about what we’re going to do,” he explained. “Just 15 years ago you’d have to do all of that with a smart guy pulling wrenches here at the track after a practice session. Now we’ve got smart guys pecking on the computer. But when they throw the green flag its still man vs. machine.”

At 33 years old, Ragan could be considered in the prime of his career. But the recent retirements of Jeff Gordon and Dale Earnhardt, Jr. are reminders that driving a racecar won’t last forever.

“Driving is a short window in the big span of my life and I want to make hay while the sun’s out,” he said. “Wives and girlfriends and children have to put up with a lot, but it won’t be forever.”

He admitted it was difficult to leave his two young daughters that morning for this appearance at Daytona.

“Sometimes you miss things you want to be at,” he said.

When I motioned to the water with a smile he answered,