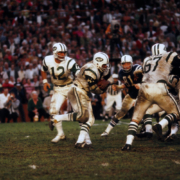 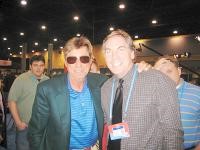 Who’d have thought the guy considered the icon of the “Me First” decades of the ‘60’s and ‘70’s is actually most interested in helping others.

“We have to learn from each other’s shortcomings and triumphs,” Joe Namath told me this week from his home in Jupiter.

It’s a line also included in the forward of his latest book, “All the Way: My Life in Four Quarters.” Calling Joe a “reluctant author” the book chronicles the highest highs and the lowest lows of Namath’s very public life. At 76 years old, Namath said he wanted to share some of his life’s experiences.

“Sports taught me a lot of things,” he said when I asked why he decided to write another book, his fourth, in his seventh decade. “It taught me how to deal with life, with people. It taught me humility; we don’t accomplish much on our own, that was one of the major reasons.” 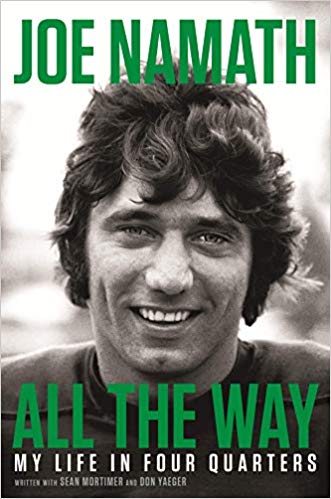 It was one of the few parts of the conversation that focused on sports. Namath was one of the most famous athletes on the planet when he helped engineer the New York Jets to the 1969 World Championship in Super Bowl III. He was a cultural icon. Recently he was voted the most interesting character in the NFL’s first 100 years.

His first book, “I Can’t Wait Until Tomorrow . . .“Cause I Get Better Looking Every Day,” was about football and fun. He says that was easy because his co-writer Dick Schaap made it that way. “It was a first time experience. He didn’t allow it to be tedious. It made sense.”

But writing this book was more about giving people hope than about any on or off the field exploits.

Namath was approached about writing a book on the 50th anniversary of the Jets victory over the heavily favored Baltimore Colts that also corresponded with the centennial year of the league.

“The publisher contacted me and I figured they knew a lot more than me. I wasn’t thinking about it,” he said of the genesis for his latest narrative.

But it didn’t start out well.

“We were stumbling around and the process wasn’t right. I wasn’t happy with what we had done. We changed some things, co-writers. But my daughter Jessica, and my best friend Jimmy Walsh gave me a lot of encouragement. It was tough.”

The result is a unique collection of stories, told by Namath against the backdrop of him watching Super Bowl III on his iPad at home. It’s the first time he’d ever watched the whole game and his memories lead from one story to another. He chronicles the game and certain plays, feeling the same emotions he felt in the Orange Bowl that historic January afternoon. Although it’s separated into four quarters, the book doesn’t feel chronological and it follows no timeline. It’s as if you’re sitting at Joe’s kitchen table and he’s just talking about his rich and full life.

As you read along, you hear the stories in Namath’s distinctive Western Pennsylvania/Alabama voice. And because of that uniqueness, the audio book of “All the Way,” narrated by Joe, has been nominated for a Grammy in the spoken word category. It’s possible Joe will add a Grammy to all of his World Championship, National Championship, MVP and All-Star awards.

“When they asked to record the audio book I told them I’d do it on one condition: That I do it!” he said with a laugh. “I know about the relationships, my brothers, Coach Bryant. It only took a few days actually after we had finished the writing.”

And Namath had an inspiration while recording the audio book of “All the Way.”

“Yogi Berra came to mind,” he explained. “I can see Yogi in Shea Stadium when he was managing there. I was standing on the field with him talking about not to many fans coming to the game. He said, in the way only he could say it, ‘Joe, if they don’t want to come out to the ballpark there’s no way you can stop ‘em.’ That’s how I want to hear it! I want to hear Yogi talk about it! I thought I could do it better than anybody else”.

With his celebrity status and his penchant for helping out, Namath started his outreach with a football camp for kids.

“My teammate, John Dockery came to me with an idea to use the sport of football to teach kids about life. Winston Hill, John and I did a football camp but mainly for kids to learn about life. If it wasn’t for my coaches and mentors in sports, I’d have been in the Air Force. If I couldn’t play sports, that was my plan”

Through four locations and 46-years in New England, the camp was a summer home for thousands of kids 8-18 years old. Boys and girls.

“It started at a ski lodge in Vermont. We didn’t even have a real field! We had such a demand we went co-ed,” Joe mused. “We didn’t know anything about teaching football to girls. But we had some good girl players come through there.”

Throughout the book Namath talks about how alcohol, specifically Scotch, fit into his life. And how he lost control of it. He quit drinking once at the behest of his then-wife, but says their divorce gave him an excuse to start drinking again. He details his nationally televised,” I want to kiss you” debacle on Monday Night Football, his embarrassment and decision to get some help. He’s been sober since 2003. So its no surprise Namath has become an advocate for those who battle addiction.

“I’ve experienced things in the last twenty years, people coming up to me on the street or in airports to say hi and shake hands,” he explained. “And at the end of the conversation they’ll lean in and whisper, ‘I’m a friend of Bill’s’ (identifying themselves as recovering alcoholics). “I always say ‘Speak up! Don’t be ashamed of that!’ We’re creatures of habit. We get addicted to things. We can do something about it. My dad was a cigar and a cigarette smoker most of his life. I saw him quit, cold, one day after he got emphysema. I knew if he could do that, I could do it. Without knowing about substance abuse we can get caught up in it. I wanted to emphasize that in the book, don’t be afraid to reach out and get some help.”

“I enjoy reminiscing but I also enjoy helping,” he continued. “Any of us can reflect on our past, we’re darn lucky to not to have made a bad mistake. I was under the influence of alcohol plenty of times driving and lucky and I didn’t hurt anybody. I believe I had two guardian angels. There wasn’t any skill to that. That was pure luck.”

Recently Namath has lent his name to the Neurological Research Center at Jupiter Medical Center. They’re studying how to treat traumatic brain injuries, specifically though hyperbaric chamber oxygen treatments. Again, Joe wanted to help out after hearing a teammate’s story.

“I was lucky. Our offensive guard, Dave Herman shared the problems he was having at our camp. I saw him deteriorate over four years. He was a guy who was afraid of nothing but he was terrified by what was going on.”

“I know I had some concussions, we didn’t know what that was at the time,” he explained. “You know, get your bell rung, come to the sidelines, go back in the game. I figured I owe it to myself and I owe it to my children to find out about my situation.”

Namath had brain scans done beginning in 2012 when he says the left-rear portion of his brain was just dark on the scan with no blood flow. After over a hundred hyperbaric oxygen chamber treatments, he says current scans show things have changed. “I’ve seen my brain before and after. What we saw initially is not there. The cells are getting blood. It works.”

Namath has pledged to help raise $10 million for neurological research through the Joe Namath Foundation. His foundation also supports children’s charities. He’s helped raise over $33 million for the March of Dimes over the last thirty years.

Two times in the book Namath recounts being alone working on big decisions that changed his life. Once in Central Park following a dispute with the league over his “Bachelor’s III” nightclub ownership and once on the beach in California while playing in Los Angeles for the Rams pondering his football future. While not talking about religion specifically, Joe refers to his spirituality and some clarity he gained in those situations. He told me that hasn’t been uncommon in his life.

“The first time was after my senior season in January of ’65,” he said. “I was driving out of Tuscaloosa, headed to New York. I had that kind of experience. Spirituality, call it what you want but I had that voice in my mind. I was thinking ‘Joe if you ever do anything in your life where you have to look over your shoulder again you’re a damn fool.’ Whether it was taking pop bottles off somebody’s porch as a kid for two cents or something else, I hated that feeling, looking over my shoulder.”

“That time on the beach in California I felt smaller than a grain of sand. It was energy, spirituality. The first time I came off morphine after my knee operations, I was so uncomfortable, I wanted to get out of my own skin. I was going crazy. I was reaching for that button and I heard that voice that said, ‘Joe, calm down, you’re with doctors and nurses in a hospital.’ Reach out for help, don’t be embarrassed.”

Still watching football and cheering for the Jets, Namath says how the game has evolved is “wonderful.”

“It’s so much more efficient,” he said of today’s NFL. “There was a time where we didn’t work as efficiently. Guys used to sell insurance in the morning and then come to practice. The way it’s operated on the field is so much more efficient. They get a chance to work together so much. I watch these guys now and how they use every second.”

And then Joe left me with this:

“I’ve made a lot of mistakes,” he said “But I’ve had chances. You have a chance to make it right. Don’t get down on yourself.”